(First off, I'd like to welcome any fellow "Hamsters" who found their way here from my link on the FB group "Proximal Hamstring Avulsion and Surgery," which I recently joined.  The first few years of my blog are mostly concerned with speedskating and then CrossFit, but starting August 25, 2014, there are a lot of hamstring-related posts (and whining).  Hopefully reading this will help while away a few hours for those of you who are enduring those mind-numbingly boring  days post-surgery...and who knows, if you have enough of the "good" pain meds, you might even find me funny!)

So where did I leave off on blogging?  Oh, yeah...14 months ago, in a post about the Granite Games.  And where have I been these past 14 months?

I think the most likely answer is "mildly depressed."

During the summer of 2015, I had been dealing with my hamstring issues (one year post op and still having pain that no one could diagnose and that prohibited me from speedskating and made CrossFit--and daily activities such as walking, sitting, and driving--painful), as well as family issues relating to my dad's progressing language loss and dementia.  I think it finally caught up to me in late August.

A month or so after my last post, from July of 2015, I did another CrossFit competition.  It went fine, and it was a partner comp so it wasn't even too difficult.  I took a couple days off from working out after the comp, even though I wasn't too sore or tired...but when I went back to CrossFit after my time off, things were different.  My workouts were horrible, and not in the performance sense but in the "feel" sense.  Rather than trying for one more rep or five more pounds, I frequently found myself, midWOD, wanting nothing more than to drop the bar and crawl into a corner for a nap.  In fact, I did quit in the middle of a WOD more than once.  And I didn't just feel that way in the gym..."real life" was a struggle, as well.  Not wanting to work out, not feeling motivated or energetic at work, being crabby much of the time, and drowning my sorrows in junk food and Diet Dew.  And that's how things went for all of September and October

Finally, I got sick of it.  A CrossFit coach had talked about adrenal fatigue with me when I told him how I was feeling, and when I mentioned it to my chiropractor he said "yeah, I've told you that before...you practically scream adrenal fatigue."  So at the end of October I got on some supplements for adrenal fatigue, took six weeks off from CrossFit, and started trying to get more sleep. (I know, I know...eating healthy is also important for adrenal fatigue.  I'm still working on that part).  I also got sick of having menopause symptoms, so in the late fall I went on hormone replacement for that as well.

I figured I should be feeling better in no time.

So I tried a bit of speedskating when the rink opened in November, but quickly realized that it was still far too painful--which was not a happy realization.  And then right after I started going back to CrossFit in mid-December, things got difficult for my parents and I had to help them move out of their northern Minnesota home and into a townhome in the Twin Cities.  Shortly after that we realized that my dad needed more care than my mom could provide, and we had to move him into memory care and help my mom deal with her new life living alone.  After that came many, many months of working to get my dad qualified for Medical Assistance.

Safe to say, those were some stressful months and I did not start feeling better.

And what about the hammy all this time?  Well, it continued to misbehave and I continued to try to get the ongoing pain diagnosed.  I have now, two years post surgery, consulted four orthopedic surgeons, one sports medicine doctor, multiple radiologists, at least five physical therapists, a chiropractor, and a neurologist.  I have had soft tissue work, acupuncture, multiple courses of PT, eccentric strengthening exercises, a trial of ARP wave therapy, several extended breaks from working out, two PRP injections, two weeks on crutches after the second PRP injection, and a whole lot of frustration. None of the health care practitioners have been able to diagnose the pain, and none of the interventions I've tried have helped at all.

It's been a long 14 months since my last blog post.

I'm a teacher, so summer is always a time of relaxation...but even summer didn't seem to help much this year, at least not at first.  And the first two-thirds of the summer was taken up with rehabbing from the PRP injection I had in June, which prevented me from working out for almost two months.  Finally, though, a couple weeks ago, after all the activity restrictions from my PRP injection had been lifted and I was freed from the rehab PT and I started going to CrossFit and even inline skating a bit, I came to a realization.

I've gone off the adrenal fatigue supplements, and I do think that they helped and that I did have some fatigue issues...but I think I also had some depression issues.  And I don't think they went away until very recently.  As for why I'm feeling better, and why now, I'm not sure...maybe I've just adjusted to things.  Dealing with my dad's dementia is still hard, but I try to focus on the good stuff, like the way his face lights up when I walk into his room.  I still can't speedskate, but I can inline skate, which is fun but a bit scary since that's how I hurt myself.  There's a bit more of me--like 15 pounds more--to lug around the CrossFit gym, but I'm having fun getting back into doing the WOD's again after a summer mostly spent doing PT and  a few upper body exercises. So right now, it's all good (and if a teacher can say that three days before school starts, you know things are going well!)

So who knows how long it will be until the next blog post...but if I stay happy, hopefully it won't be another 14 months! 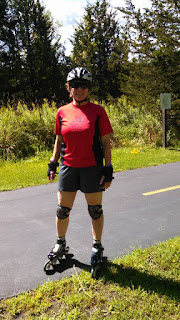 Chunky and covered with protective gear,
but ready to roll!