For almost three months, I've been waiting for the day I could write this post.  I had a lot of potential titles...

I thought about "I'm Baaaaack..."  Short, to the point, hopefully conveying all the relevant information in one pithy statement.

Or maybe "Wholly Thyroid, Batman;" this would be assuming, of course, that my "sluggish skating" issues did, indeed, turn out to be "wholly thyroid." I like a good pun (or even a bad one).

But now that the day is--I think, I hope--here, I'm going to go with "Desecration, Revelation, Medication Kicking In."  It's a line from a song called "Digging Deep," by the Melismatics.  I was introduced to the song this spring, via this YouTube video of the race action at our local velodrome (no, I'm not crazy enough to race there, but some of my friends are).

http://www.youtube.com/watch?v=44lTJ2c-Ql0
(I wanted to post the actual video but couldn't get it to work--so went with the link)

Since I was, at the time I first heard this song, both trying to finish out the school year and struggling mightily with my skating times, the song spoke to me.  I especially liked the line that became my post title, because I was hoping that MY "medication" would begin "kicking in" soon, and I'd be back to skating the way I should be.  Every day, just before I'd pull into the school parking lot in the morning or the Oval parking lot in the evening, I'd find that song on my iPod and play it loud.  Time to dig deep and plow through the end-of-the-school-year paperwork; the crazy schedule changes; the kids who are more than ready to leave the steamy classroom for some summer fun.  Time to dig deep and soldier through another slow, sluggish, torturous workout; to stay mentally positive as the lap times steadily rise; to convince myself that sooner or later it just has to get better...

Sadly, while the school year finished in very satisfactory fashion, the skating just would not come around.  Not after, when lab tests confirmed that my thyroid was low again, I got a med increase.  Nope, no change, even though labs were now roughly in range.  Then another doctor, and another med increase.  And I waited.

Generally, when you change thyroid med doses you wait a month or six weeks before re-doing the labs, because it takes a while for the  thyroid hormone that you are taking to start working in the body.  When I was first diagnosed last year, though, it was in April and I wasn't skating on the Oval yet.  And then, pretty quickly after I started skating, my doctor added a second, faster-acting thyroid hormone that took pretty dramatic effect, pretty quickly.  So there was no waiting through bad workout after bad workout, analyzing every lap time in hopes of seeing some tiny, positive change that might be the start of something big.  This time, though, waiting for a positive change was becoming excruciating.  Because if it doesn't change then it's not thyroid...and if it's not thyroid then I don't know what the problem is and whether it can be fixed...

Sunday, I thought I saw that change.  It was just a relaxed "recovery skate" with my sister and a friend, but it was the fastest I'd skated that particular trail this season...and it felt good.  So Monday I was very excited to go to the Oval and do my endurance workout...maybe, just maybe...

And yesterday the workout felt good; really good.  But she who lives by data dies by data, and when I got home I compared my lap times to previous years' similar workouts and discovered that Monday's times weren't as good as they had felt.  But there was water on the track and in one corner I had to skate in the outer lane to avoid puddles, but in the other corner I had to modify (as in "screw up") my corner entry to avoid a puddle but then had to skate a small part of the corner inside the inner lane.  So did all that mean that the laps were longer or shorter than they should have been?  Clearly, I needed more data before I would know whether I was skating well.

So today, I decided to do a couple of tempo ("as fast as you can") sets.  A 1000 meter and a 7-lapper (almost 3000 meters) because I had a fair amount of data on these, from previous years as well as from this year's slug-fest.  The track was dry, there were no "Skate Park Patrons" to dodge--I should be able to get clear, concrete data.

First tempo, the 1k.  I did a rolling start and used the first 200 meters to get up to speed, then just hammered as hard as I could for two laps.  My friend Melissa skated with me, but in the outer lane so as not to mess up my data.  I felt pretty good--no "die" at 300 meters like I've been feeling all spring and summer, no dead legs...and what's this?  Something new!  I'm skating so hard I'm actually out of breath!  That really hasn't happened yet this season.  And when I got done I had to coast with my hands on my knees for a bit, catching my breath...standard for past years, but again, a "Spring/Summer of '11" first.  And then I looked at my stopwatch--and yelped with delight, alarming Melissa who was coasting past dealing with her own oxygen debt.

The last time I did a 7 lap tempo this year, I started with a 43 second lap and finished with a 50.  50--what the heck?  I warm up with faster laps than that!  My past years' 7 lap tempos have averaged 42-second laps, and my laps are usually pretty consistent from the first to the last.  In fact, the "slow down one or more seconds per lap" is, I think, a hallmark of my "hypo skating." I really, really wanted to skate a good pace today, but I was also a bit scared.  I haven't been able to skate with any intensity for 3 months; I had used a lot of mental toughness on just putting one foot in front of the other to get to the end of the workout, but had used almost none to push hard--because there was simply nothing there to push.

So I took off on the 7 laps, wondering if mentally I could push myself enough to see what might, finally, be there physically.  I focused on the 3k race strategy Coach TieGuy taught me: relax the first three laps; work the corner exits on the next two; work the whole corner on the final two.

Mel again skated outside of me, which meant that I'd pull away from her on the corners and she'd pass me on the straights.  I concentrated on what I was doing each moment, trying to avoid falling into my usual trap of "how many laps do I have left?"  Stay down.  Hit the corner entry.  Drift wide on the exit, don't forget the extra crossover.  Go, go, go.

With 2 laps left I was really tiring and was, as in the 1k, very out of breath--like my breathing rather than my legs was the limiting factor. Knowing I only had 2 to go, though, I was mentally able to say strong and finish hard.  On the second to the last corner Mel was ahead of me and I worked as hard as I could to not let her get away from me...around the final corner...both arms down for the last 50 meters to the finish...

I looked at my watch.

Much better than last month's 50!  As it turned out, all my laps were between 43.1 and 44.8 seconds--nice and consistent, and my last two laps were faster than the middle two!  Not my best 7 lapper by any means, but WAY better than any yet this year.

So I think...I hope...just maybe...I'm getting back to normal.  I've been meaning to call TieGuy for the past several day; I need to give him the weekly update and ask a few questions about upcoming workouts.  But I've been putting it off, not wanting to bore him with yet another "I'm slow and I can't do anything about it and it sucks" whinefest.  I kept thinking...just one more workout, maybe it will get better next workout and I'll have something positive to report.  And now...well, now I do!

It may be that the past couple of days have been a fluke.  Maybe I'll plummet back into the depths of suckdom on my next workout.  But right now... 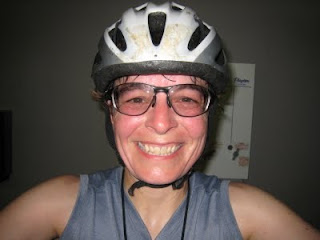