So I made a plan: I was going to wait at the line until the other skaters took off, then start by myself and time all my laps. And, as soon as I made the decision, I felt relieved…and also disgusted with myself.
It’s dumb.  Nobody cares how I do.  Well, Hubster and TieGuy have somewhat of an interest, but in terms of the folks at the track….Nobody.  Really. Cares.  whether I  beat someone or not.  And honestly, I don’t either…I’d rather skate a fast time for me and get beaten than skate poorly and beat someone.  So why the panic?  “Avoidance of failure,” yes, but that’s too logical.  This is irrational, ever-growing—and very hard to fight.  And it's changing the kind of racing I'll do.


Over the years, I’ve modified my racing more and more based on my “avoidance of failure.”  I don’t skate any pack-style long track ice races anymore.  I rarely skate inline marathons or half-marathons anymore.  And I certainly don’t enjoy SIS races the way I used to.  I’m lucky that my chosen sport allows (most of the time) for my favorite form of competition: skate my own race, then compare scores afterwards.  Actually, I think it goes well beyond luck, and probably is one of the aspects of speedskating that makes it my chosen sport.
Still, I feel like there’s something wrong with “taking the easy way out;” with not going head to head with someone.  But why? I know myself, I know what I like, I have a sport that I love that almost always allows me to not do that which freaks me out.  So why do I feel like I need to try to make myself be more “success” motivated?  Actually, although I see where Jesse is coming from with those terms, I don’t really like them.  I’m not sure “failure” is what I’m avoiding and “success” is what others are seeking; I have no problem losing to someone when we compare scores, I just don’t want to be aware of our positions when I’m racing.  And really, is that something I should strive to change?  Can I even change it? (there’s an implicit “at my age” here).
The jury is still out, but for last night I decided to go with my wimpy self and do my “start after everyone else” plan.  And it went well; the lap times were pretty good, and I got to skate my own race.
And I got a lot to think about, too...

On a lighter note, here are some pics of the racing.  And the best part of the night was that Mel won the series for the women, and got inline skates for the prize. Mel has been kicking butt in her old school boots, which are held together with duct tape and  have 5x80 wheels (5, 80 millimeter wheels—most people skate on 4 100’s or even 110’s)—which is much like winning a Nascar race in your Yugo.  The skates couldn’t  have gone to a more deserving person! 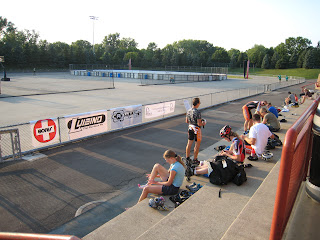 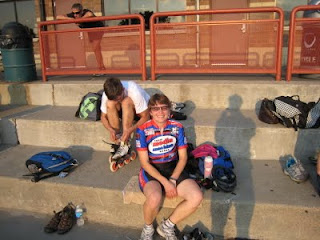 Me and my mountain of gear. 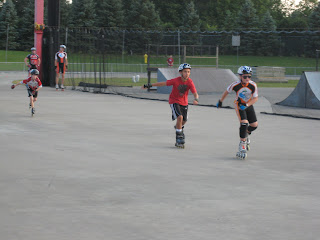 Some of the Juniors heading for the finish. 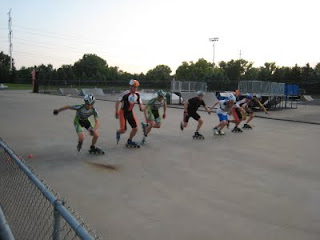 The start of one of the Elite men's races. 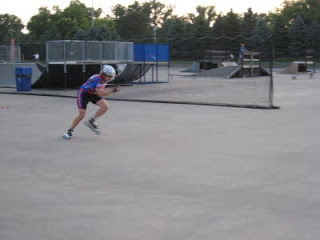 My start of the 6 lap race.  Notice that no one else is in sight. 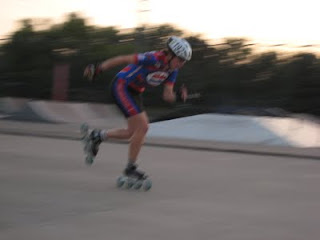 Just crusin' along, all by myself... 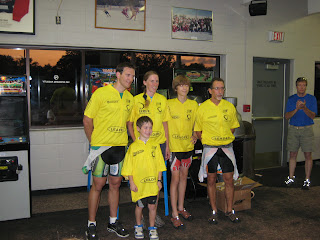 The 2011 Summer Inline Series season winners, in their yellow jerseys.
Posted by Kaari at 5:18 PM