The long track life has been frustrating lately.

After last Monday's 5 minutes of dryland, I skated my last oval inline workout of the season on Wednesday.  I was supposed to do 4x8 minutes, but Coach TieGuy reduced it (after I whined a bit over the phone) to 4x4 minutes because I'd been sick for two weeks with what turned out to be a sinus infection.  The skating workout was OK, if slow; it was 87 degrees that day--insanely hot for Minnesota October weather--but fortunately the heat didn't bring out the skateboarders like it usually does, so I had a SkatePunk-free workout, which was a refreshing change.  On Thursday, I did a whopping 10 minutes of dryland, which didn't feel too bad.  Between the improving dryland workouts and the nice antibiotic I was on last week, I figured that things might be looking up.

Not so. After a lovely, workout-free weekend at the cabin with my best friend from college, the Hubster, my brother-in-law Sherpa Boy, and my dog Keira (a strange but quite enjoyable mix of people/animals), I was ready to tackle the whole 43.5 minutes of down time in Monday's workout. 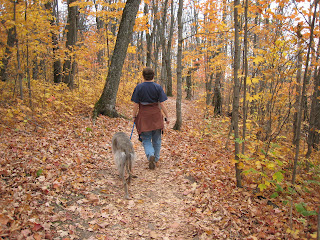 Here's me and Keira on our only "workout" of the weekend, a walk at Oberg Mountain. 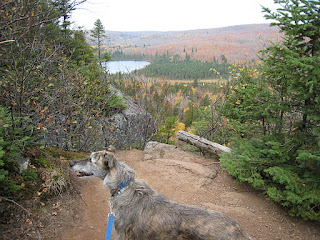