When we were kids, my sister and I often had PopTarts for breakfast, causing us to be--for likely the first and only time in our somewhat nerdy childhoods--the deeply-envied "cool kids" when we were hanging with our cousins at the cabin.  They had oatmeal, we had sugar-frosted sprinkle-bedecked cherry goodness.

Back then, there were only a few flavors of PopTarts (the frosted ones, I mean...I'd eat the "plain" ones once in a while, usually toasted and buttered (!), but the frosted ones were where it was at). Blueberry, strawberry, cherry, and then the radical non-fruit versions--brown sugar cinnamon, chocolate, and my favorite, a tasty one that had chocolate pastry, vanilla filling, and vanilla frosting.

As an adult, I continued to be very fond of PopTarts, even as I learned the horrors of simple sugars and processed carbs, and even as I became more and more aware of my addictive response to same.  Finally, though, on April 1, 2000, I decided that something must be done about my ever-growing carb addiction and waistline, and I began a low-carb diet...sadly bidding goodbye to PopTarts, and anything else with sugar, along the way.

Surprisingly, it was quite easy to go sugarfree...much easier than trying to limit my intake.  As my grandma used to say, "One bite is too much, and the whole pie is not enough."  Much easier to make the decision once to not eat sugar, rather than having to decide over and over again if/how much of something to eat, while my brain and body are screaming "more, you idiot, more!"

So the sugarfree thing was easy...except for PopTarts.

I could turn down fancy desserts, people's homemade specialty cookies, even my own 40th birthday cake at the surprise party the Hubster threw for me (he knew I wouldn't eat any, so he wasn't upset) without a pang.

To illustrate just how strong my PopTart addiction is, I give you the story of "The Stand."

"The Stand" is Steven King's novel of the epic battle between good and evil after 99% of the population is wiped out by a germ-warfare version of the flu.  Like most Steven King novels, it is filled with death and destruction; decapitation and decomposition (I love Steven King's writing style and "voice;" I just wish he'd pick less gruesome topics!).  Anyway, it's a pretty grim story, but for me, the most chilling part in the whole 800 pages came when one of the main characters was having breakfast prior to (if I remember correctly) going out with a crew to help remove dead bodies from homes and bury them.  As he sat on the front steps eating his breakfast--a PopTart--he mused that, as soon as the current supply was exhausted, there would be no more PopTarts ever again (the 1% of the population that remained was unlikely to fire up the PopTart factories again, being somewhat busy with their epic struggle between good and evil and all).

I paused in horror, then re-read the sentence again.

I think my heart skipped a beat.

So you can see why my own self-imposed PopTart ban was not easy.  And it became more difficult over the years, as Kellog's added fancy new flavors (Pumpkin Pie PopTarts in the fall!  S'mores!  Hot Fudge Sundae!), and began packaging them in two-packs for sale in gas stations and vending machines--including the vending machine at the oval.  It was bad enough to watch the little kids munching PopTarts between races on Saturday mornings, but the worst was the day when Coach TieGuy (who eats about once a month, I think)  showed up at practice eating PopTarts.

Well, the wheels started to come off the sugarfree wagon about a year ago.  Yes, that's right--I was sugarfree for over 10 years, and yes, I counted the days/weeks/months/years just like a recovering alcoholic.  I had my own definition of "sugarfree," of course--I didn't worry about sugar in things like salad dressing or even barbecue sauce, because those didn't seem to fire my cravings.  But anything with major amounts of sugar was out: cookies, cake, pie, ice cream, muffins, cereal, candy, granola bars.  And, of course, PopTarts.

Now, the only reason I was able to exist in this sugarfree state was because of artificial sweetners.  I have a huge sweet tooth and it didn't (as some people in the low carb world predicted it might) go away when I stopped eating sugar.  So it soon became clear that I either needed to find sugarfree versions of cookies and whatnot, or I was going to dive back into the sugar.

So I discovered the joys of Splenda and sugar alcohols (it's a class of artificial sweetners, not a drink), and went merrily about my way eating sugarfree cookies and candy and ice cream, and occasionally thinking longing thoughts about PopTarts.

Until October of 2010, when I decided to do a trial of eating gluten-free, to see if that would alleviate some chronic stomach pain I'd been having (and which my doctors, when I mentioned it to them on visits for other things, didn't seem to think was worth investigating).  The problem with gluten free, though, is that it's almost impossible to find gluten free/sugarfree stuff.

So, I gradually started eating things with more sugar in them.  Things still might have been OK, because I went back to gluten after 8 months--since my stomach pain came back while I was still religously gluten-free--and I happily went back to my storebought and homemade sugarfree goodies.  Until, that is, I went to a new doctor about my thyroid issues.

"Do you eat a lot of Splenda?" she asked.

Hmm, well, considering that I used to go to Canada to buy it before it was approved for sale in the US, and considering that I've used it multiple times a day for the last 10 years...I guess I'd have to answer that with a "yes."

Well, turns out Splenda inhibits thyroid function.  Lord knows I don't need to do that, so I immediately quit the Splenda--or so I thought.  I did discover, 2 weeks into my self-imposed Splenda ban, that Diet Dew contains Splenda, so then I had to quit that, too.  As well as pretty much every sugarfree treat that I've bought or made over the past 11 years. So you can see why it wasn't long before I began pushing the envelope of "sugarfree."  And last Sunday, I finally caved completely...after my dryland workout, I had PopTarts.  Brown Sugar Cinnamon PopTarts.

You know how sometimes, things taste better in your memory or in anticipation than they do when you actually eat them?  Well, this was not the case with PopTarts; they were exactly as tasty as I remembered.

So I tried the blueberry the next day.

They, too, were fabulous, and clearly the sugarfree dam has broken.  So when I headed down to Milwaukee on Thursday for a weekend of skating at the Pettit, I was pretty sure the drive would be enhanced by some junk food...you know, maybe a PopTart or something.

Remember that old commercial that asked "how many licks does it take to get to the center of a Tootsie Pop?" Well, I don't know the answer to that, but I do know how many PopTarts it takes to drive from Minneapolis to Milwaukee. 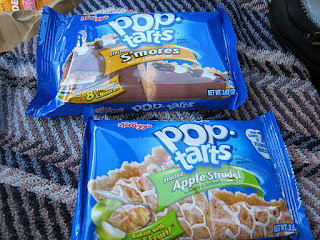 That's 75 MPP (Miles Per PopTart), for those of you keeping track.﻿
Actually, it took 4 PopTarts, 3 McDonald's chicken strips, a diet coke, a diet Dew (I figure, how much Splenda can there be in one diet Dew?), and a cinnamon roll.
Did I mention that I have an obsessive, all-or-nothing personality?
Anyway, when finished my drive and  waddled  walked into the oval, feeling well-sugared and caffeinated and still a bit full, I wondered how the workout would go.  I didn't have high hopes anyway, even without the sugar binge, because of my generally poor spring and summer of workouts, and the mysterious left leg pains I've had the past couple weeks.
So I got on the ice--and had one of the best workouts I've had in the past 5 years.  Seriously, it had to be top 5.  Lap times 2 seconds better than any Milwaukee workout I've done before, and I felt great.
Now, I know it wasn't the sugar...I've gotten some things to "click," technically, this summer, and I guess they transferred well to ice.  But apparently the PopTarts et. al. didn't interfere with the workout, either, which is actually kind of unfortunate...I'm afraid that "good workout" is now linked in my mind with "eat PopTarts"--and there are a lot of tasty-looking varieties out there that I haven't tried yet!
Posted by Kaari at 12:51 PM