When we left off, I was contemplating cracking open a can of pre-camp-finale-time-trials Whoopass.  Usually it's not a good plan to try a new food, beverage, sleeping position, song on the iPod, or method of blowing one's nose right before a race.  But what the Hell, I was feeling adventurous.  So I added the Whoopass to my traditional pre-race McD's bacon-egg-and-cheese biscuit (I think that breakfast combination may have been a dietary low, even for me).  I've only had two energy drinks before, both Red Bulls, both bought in desperation on long post-race drives home from Milwaukee, and both times I was pretty sure that the gag-inducing taste was more responsible for keeping me awake than was the caffeine content.  By energy drink standards, the Whoopass actually didn't taste too bad-although I did only manage to choke down half of it.  Which was probably just as well; although the can extols the virtues of Whoopass (I just love typing that!) as a recovery drink, I can't imagine how much "recovery" one could gain by a beverage that contains 200 milligrams of caffeine.

And half a can seemed to be quite enough.  By the time I finished my spinning bike warmup at the oval, I was obnoxiously perky and chatty--in fact, I reminded myself of my sister Energizer Bunny (she of the multiple pre-workout "energy enhancing" substances) when she's bouncing around before we head out on a trail skate.  On the 1-10 "mood elevation" scale, I give Whoopass an 11.  Good to know.

I was scheduled to do a 500 and a 1000, which seemed like quite enough.  My legs actually felt better than they had the previous morning, but that wasn't saying much. Still, I approached the start line for the 500 with, if not confidence, at least not nervousness.  After all, thanks to Derek Parra's excellent instruction I had finally managed, just the day before, to understand a critical aspect of start-positioning--maybe this would be my first "no goofy "ready" position, no frilled lizard sprint off the line" start.  OK, so I hadn't really had a chance to practice the new start technique much, but any bit I had managed to retain would be bound to be an improvement on this... 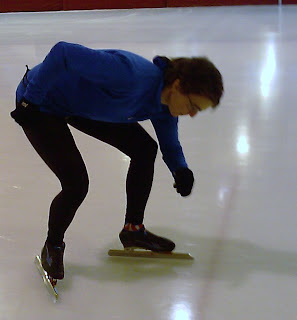 It's actually physically painful to look at this picture.

So, as Derek announced "go to the start," I glided forward to the line and prepared to assume the new-and-improved start position

I sank gracefully into the new, hips-forward-no-butt-in-the-air stance and waited for...

...the whistle announcing I had false started.

I looked questioningly at Derek--surely I hadn't moved?

"Your blade is over the line," he said, and I looked down and sure enough, it was.  (That's about the only thing right in the photo above--at least my skate is behind the line!)  Turns out I was so focused on putting my body in the right place that I forgot about where my feet were.

So we tried it again, and this time I heard the gun instead of a whistle.  So I lumbered off down the track, trying to remember all the things I had learned in camp.  Unfortunately, a couple of these things apparently displaced some previously-ingrained aspects of skating that used to have residence in my brain, and I realized, halfway down the first straightaway, that I had forgotten to breathe.

Once I rectified that minor matter, I rounded the first corner and headed down the backstretch.  Now, the backstretch was inhabited by Josh and Levi, two outstanding (and very patient) young skaters who had helped Derek with the camp throughout the weekend, and who were now loudly and enthusiastically screaming excellent advice as we skated by.

So, even though I'm usually a one-arm-only kind of gal (I find it best not to confuse myself by sometimes swinging one arm, sometimes, two, sometimes none...it's just so much to keep track of), I dropped both arms and started swinging aggressively.

CRAP!  I'm entering the corner and I've completely forgotten how to do a crossover!

So I coasted into the corner on both feet.  And I continued coasting around the corner...past the apex...toward the exit.  My brain was simply frozen; I couldn't figure out which foot to pick up first, and what I would do with it after I picked it up.  I did, however, retain enough brain function to begin cussing extensively as I approached the corner exit.

I finally got a few synapses firing and managed to pick up my right foot, fling it over my left, and crossover my way out of the corner--still cussing--past a laughing Derek.  Not one of my finer moments.

Or, as it turned out, my finer times.  52.12   Might have been a decent time for a nice gale-force sub-zero day on the Roseville oval; mighty pathetic for the fast ice of Salt Lake.  Add another to the "Epic Salt Lake Race Fail" list...I think I'm up to four now.  At least this time I knew why I was so slow...it's hard to skate fast when you don't move your feet!

Still, I must have been on a residual Whoopass high, because I left the ice laughing about my  "oops."  And, on the plus side, at least the race drove the "I Like Girls That Drink Beer" earworm out of my head (note to self: be careful what song you listen to last before you take the iPod off) and replaced it with the slightly-more-appropriate (if more profane) "Hate My Life."  I don't (hate my life), and if I did it certainly wouldn't be because of a silly race--but it made me laugh at how quickly the song took up residence in my brain after the race.

So then it was time for the 1000.  By comparison with the 500, the 1000 was tame.  I didn't false start, I crossovered wherever I was supposed to crossover, and I even managed to remember a few bits of technical information, for a second or two.

I also got tired, really tired, at 600 meters.  But not that "I'm going as hard as I can, I can barely see, not sure I can hang on" tired that foretells a good 1000 time.  No, this was the "hmm, I think my heart arrhythmia just started and my legs just stopped" tired.

My 1000 time was slow, but not abysmal like my 500 time.  Actually, the saddest thing about the races was that they meant that camp was almost over.  When you've spent 90% of your waking hours for the last three-and-a-half days doing something you love, it's hard to see that coming to an end.

But it was coming to an end, and so is this post.  I had intended to go into some serious philosophical musings about camp and technique and the upcoming season, but I think I'll have to wait until tomorrow.

The Whoopass has worn off. 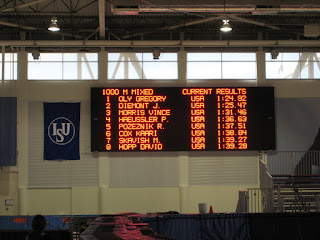