Just the Three of Us

Me, CrossFit, and skating...I think we're going to get along just fine.

I've been doing CrossFit for 10 months now, through an entire long track season.  Up until a couple months ago, though, I was pretty cautious with it--going just twice a week (and only once or not at all if I raced that week), and I was still using super light weights.  Not that I wasn't working hard; I was. It's just that I was afraid to make CrossFit too large a part of my workout routine, to the potential detriment of my skating.

In the middle of March, though, I ramped up my CrossFit to three times a week.  This was fine through the first week of April--no worries about it detracting from my skating because I was still in my "rest break" until then.  And the ramping up felt right...because I was loving CrossFit more and more as time went by and I got better at it.   And even after "rest break," was over and I started dryland, it was only twice a week and it was immediately clear that my dryland had benefited from the increase in CrossFit so that was all right. Add in a trail skate once a week or so, and it was a pretty manageable schedule (although still much heavier than previous years).  Still, I wondered what would happen when the "real" skating workouts--the inline oval workouts--started.  Could I, as I hoped at great length here, handle three CrossFit and three hard skating workouts a week?  And what effect would CrossFit have on my skating now that I'm doing it more often and with heavier weights?

Today I got my preliminary answer, and I couldn't be happier with it. 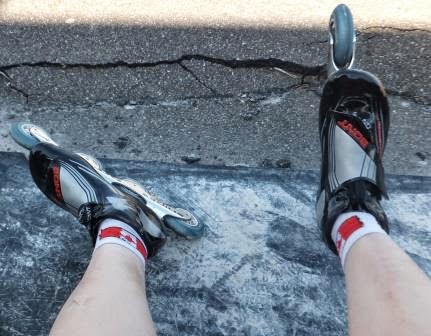 Yesterday the oval opened for inlining.  My workout was planned, my skate bag was packed...and yet as the workday passed and the time to skate drew nearer, I found myself strangely conflicted.  I wanted to skate but it was cold and windy, and there was still some water on the oval.  And the CrossFit WOD for the day looked like fun...and I could just as easily wear the clothes I had packed for skating to CrossFit...and I had no one to skate with and the Friday traffic to the oval after work typically sucks...

And I ended up going to CrossFit instead of skating.

I felt strangely as though I had cheated on someone; I felt the urge to reassure skating that it was still my favorite.  And yet I was happy I had made the decision I did.  The day was cold and super windy, the track was wet, and the WOD was, indeed, fun (I PR'd my front squat, which isn't hard to do when you've never tried a One Rep Max before.  100 pounds).

Still, today I was going skating come Hell, high water, or a really fun workout at Saturday Butt Camp (yes, yes, there should be an umlaut over the u; I'm just too lazy to Google how to make it).  Butt camp today was going to be Partner Murph, or in other words, an exact dry run of what I'll be doing on Memorial Day. But this time I had eyes only for skating.  It was a beautiful day, I'd arranged to meet Inliner Boy and Mel at the oval, and not even the funnest CrossFit workout in the world was going to change that. 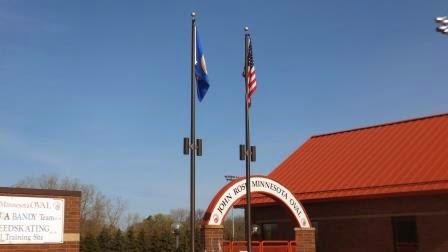 Can't pass up a day like this at the oval...look at those flags hanging nice and still.
Of course, the wind picked up as soon as we started skating, but still...

I did wonder how this past week's four CrossFit workouts--including a squat-intensive one yesterday--and the "eight workouts in the past nine days" status of my legs would affect my performance in the first inline oval workout of the year.  I figured that today would be the true test of whether CrossFit has a positive, negative, or neutral effect on my skating (I already know that skating has a positive effect on CrossFit; my running and rowing and squat performance definitely benefit from skating).  It would also be a test of whether I'm just deluding myself thinking that I can do as many workouts as I have planned for the upcoming month.

It was a perfect morning: cool, almost windless, and delightfully free of any skate park punks fine upstanding young citizens on skateboards. 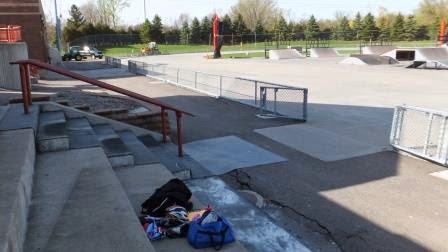 Now that right there is a beautiful sight: the oval on a sunny morning, with nary a skate park punk in sight.  And yes, all the crap in the foreground is mine.

Mel and Inliner Boy arrived, and we launched into a 4x5 minute (two hard--one easy--two hard) "German Endurance" workout.  Because it's too hard to take lap times and also time the 2-1-2 minutes, we went with 2.5 laps--1.25 laps--2.5 laps (why yes, I am a bit obsessive compulsive, why do you ask?).  It was a hard workout for the first one of the year, not to mention the first oval skate of any kind of the inline season for all of us as well.

My technique felt good, my legs were strong, and the whole thing was just way more fun than anything that gets your heart rate up to 191 should be.  And best yet, the lap times were good...really  good.  As in "just like 2007, my best year ever" good.  As in "an average of 3.4 seconds per lap faster than last year's identical workout" good.

As in "wow, CrossFit and skating are going to get along just fine" good.

So I finished the workout, and then I did some dryland and some dub practice (yes, I brought my rope) and some air squats for Murph prep.  And it was still fabulous.

And now, ten hours later, my legs feel fantastic and I'm toying with the idea of going to CrossFit open gym in the morning as well as doing a "recovery" trail skate with my sister later in the day.

After all, as long as my two (athletic) loves get along so well, I may as well spend as much time as possible with both of them!
Posted by Kaari at 6:26 PM