I have a list of "most fantastically fun athletic events that have ever kicked my butt."  The list includes the 2012 North Shore Inline Marathon; my first ever long track 10K; and a skating and CrossFit Christmas combo.

"Murph" is an iconic CrossFit workout named after Navy Lieutenant Michael Murphy, a SEAL who died in combat in 2005. Here's what CrossFit SISU has to say about the workout:

Wear a weighted vest if you can. If you are on vacation and will not be participating in MDM complete at your cabin, grandma’s house, campground or other vacation spot. Remember what this WOD is all about. Carry a heavy heart and know this workout is bigger than you, it is for a fallen hero and all fallen hero’s that we have lost. Happy Memorial Day. We hope to see you all in Excelsior tomorrow!

Memorial Day Murph was a full-on event, not just a workout. The day started with skydiving Navy SEALS,

a talk by a SEAL who had known "Murph,"

plus the National Anthem and a few words by a local pastor. All of this served to get us in the proper mindset for the day: Memorial Day Murph would be not just a fun physical challenge, but a chance to honor and give back to the men and women who have fought and continue to fight for our country. I regret to say that this is something I haven't really given a lot of thought to in the past, but after this Memorial Day I know I will be more aware of, and grateful to, those who choose to serve our country.


After the kickoff, it was time to find my teammate and to warm up.  Here we are, pre-Murph. 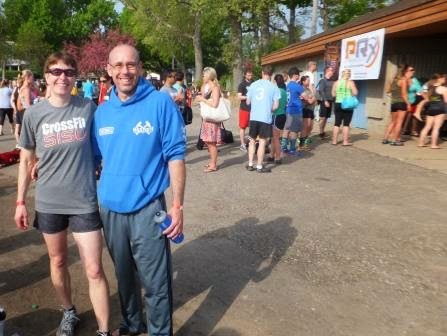 Smiling, and not at all sweaty.

My teammate K and I spent the time before our 9:40 "wave" to plan our strategy.  We both had to run both miles, but I planned to do all the squats and he planned to do all the pullups and pushups, in deference to my irritated bicep tendon (not to mention my inability to do more than one pullup per day even when completely healthy).  But then K casually mentioned that he, too, had an injured shoulder--"oh, maybe a rotator cuff tear or something"--that he was in physical therapy for.  K and his wife's vigorous assertions that he was just fine nothwithstanding, the upper body part of Murph was starting to sound a bit problematic.

I was excited for the run, though.  I was hoping to improve on my 8:20 per mile pace from the 5K I had done in March--after all, this was only a mile--so when K suggested we start at the back of the pack I agreed, but decided that I would not spend any time behind anyone that I felt we could pass. 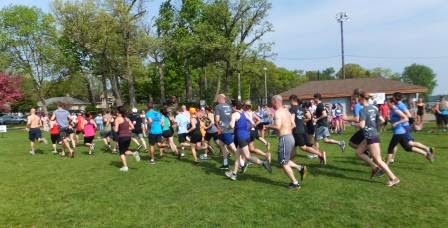 We've shed a couple layers; I'm in the purple tank top and K is in the gray shorts. 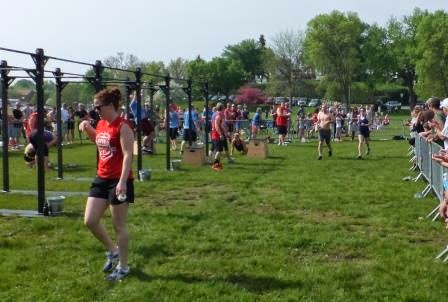 See?  No one on the rig yet, just the red-shirted judges.
Am I proud that we were first back from the run?
You're damn right I am!

So then we got down to the real test of Murph, the squats and pullups and pushups.  I quickly discovered that if I did squats in sets of 15, I was totally fine and could take a break just long enough to cross off the next "15" on the score sheet and then be ready to get back at it.  If I tried to do sets of 30, though--as I did twice--bad things happened to my legs.  So sets of 15 it was. 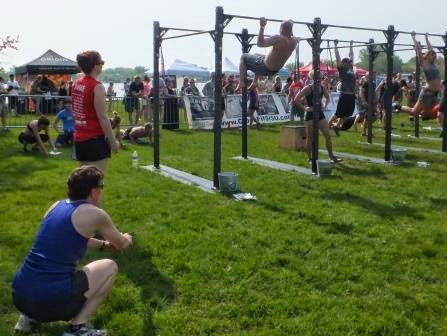 As close to "ass to grass" as I personally get, at least
when I'm doing 300 squats.  That's K on the rig mid-pullup.

I got through the squats feeling reasonably good, and then saw that K still had some pushups and pullups left--I think his shoulder was bothering him more than he was saying.  It didn't seem right to just stand there sipping water and shouting encouragement--and by then I had noticed that a lot of women were doing modified pullups and pushups.  So I yelled to a judge I recognized from SISU.

"Hey D, can I do knee pushups and jumping pullups?"

She responded "of course!" so I threw myself down on the ground and started doing knee pushups, while asking D to move a box under the rig for my jumping pullups. 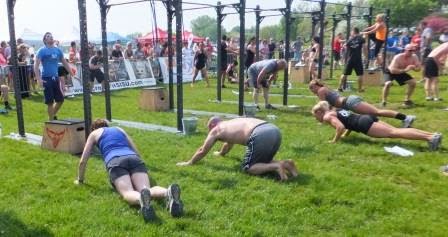 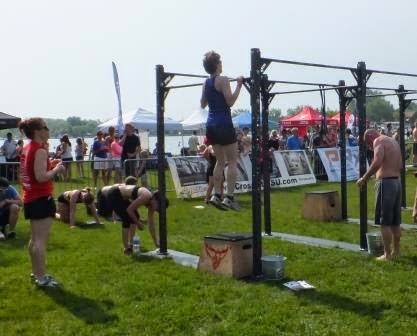 ...and jumping pullup.  Given the height of my chin
above the bar, it was clearly more "jump"
than "pullup."

I was delighted to discover that the knee pushups and jumping pullups didn't hurt my shoulder at all, and with both of us working we managed to finish the upper body stuff quickly.  After a quick break for K to put his shoes back on, we were off. 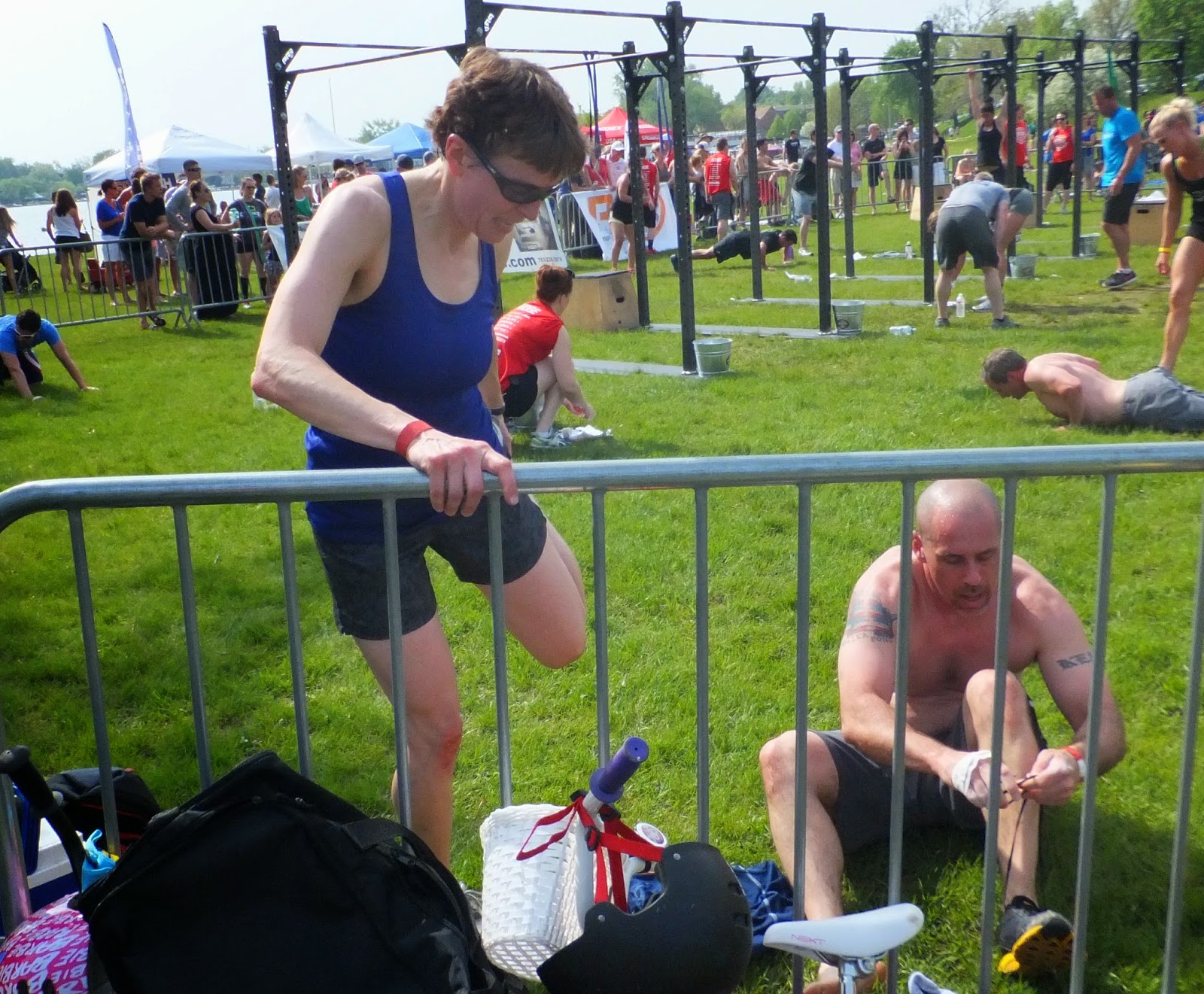 Stretch those quads and tie those shoes, we've got another mile to do! 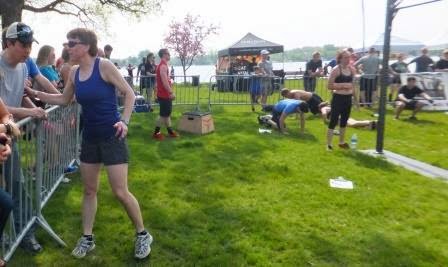 I took advantage of "shoes on time" to grab the Hubster and impart something important. I think I'm asking him to take our picture when we're running through the water.

Oh, yeah...there was running through water, Lake Minnetonka to be exact, twice each lap.  It was fun and not too deep, and nice and refreshing by lap two.  The Hubster did, indeed, get a picture of us running through the lake: 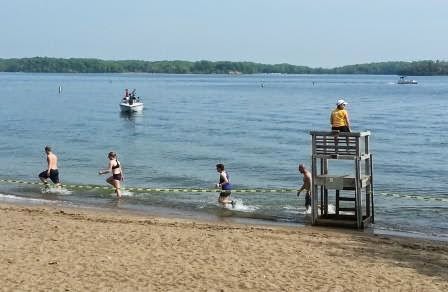 We're about to put the pass on the team in front of us.  Just as we did, the guy dove and finished the "water run" by swimming.
The Hubster got some other running pictures as well.  In fact, he managed to capture the one place in the run where I really was wondering if I could keep going. 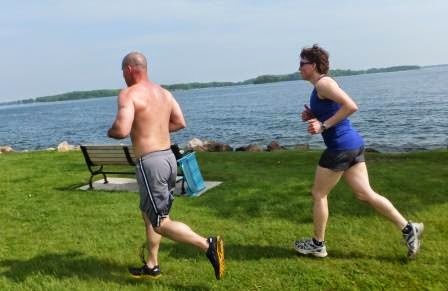 Why yes, I'm in exactly as much pain as it looks like I am. 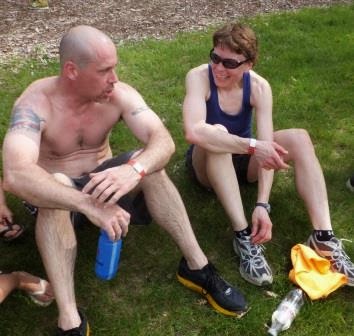 We're a lot sweatier and more tired than we were in the "before" picture, but pretty darn happy!

After saying goodbye--and "Thank You" several hundred times--to K and his family, the Hubster and I wandered around eating Paleo food from Origin Meals (they have mighty good Paleo chocolate chip cookies), trying to stay in the shade, and enjoying the music (me) and trying to avoid the music (the Hubster). 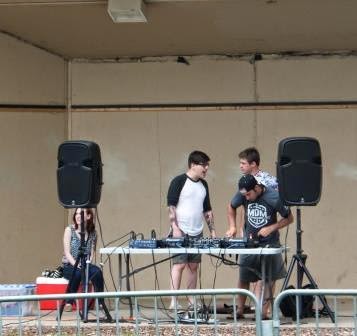 The DJ in the "MDM" shirt was really enjoying his work.  He was fun to watch.

We watched the men's teams, the women's teams, and the solo men and women, and then at 12:30, in the heat of the day, the Elite athletes had their turn. 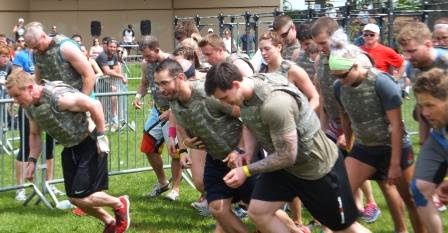 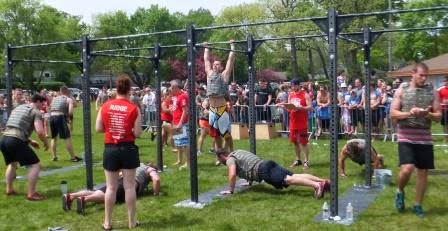 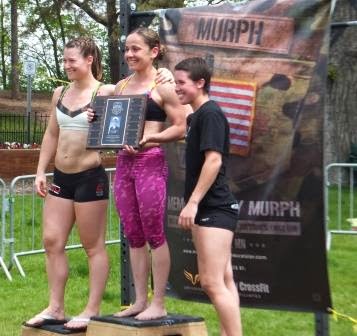 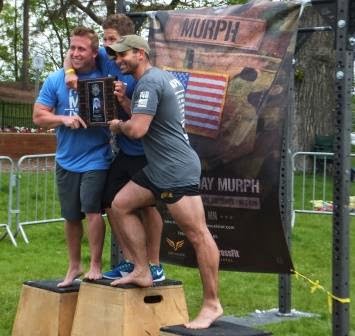 But the real winner was the Lt. Michael P. Murphy Memorial Scholarship Foundation...the SISU coaches have a mighty big check for them. 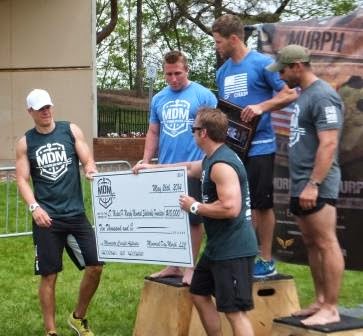 And, of course, all of the athletes were winners as well...not only because they pushed themselves through this workout, but also because they got to enjoy a fantastic event.  The SISU coaches worked their butts off to put on Memorial Day Murph, and they put together a really cool, meaningful event that not only was a lot of fun but that raised a lot of money for a good cause.

And now, the day after?  Well, my legs are sore.  Epically sore. "Day after my one and only marathon" sore.  "Fourth day of a five day speedskating camp" sore.  "Wish the toilet had a handicapped grab bar" sore.

But I've already told the Hubster "I know what I'm doing next Memorial Day."