Back in late April, when I was planning my May workouts, I was a bit concerned about how it would go.  I really wanted to do three CrossFit workouts, three oval skates, a recovery skate, and a day off per week, and the math was looking a bit daunting.  Not to mention, I was wondering how my 50-year-old body would react to such a work load.

Well, it's now June 1, and I'm happy to report that May went fabulously.

Knowing full well that this may only be of interest to me, I nonetheless present the numbers from May:


So I did miss a couple of my targets, and never did end up trying a two-a-day schedule, but here's my 2013 numbers for comparison:
To say that I'm pleased with the improvement from 2013 to 2014 would be a gross understatement--I'm absolutely thrilled.  And if I look closer at the data (who, me?  Look at data?), I'm even more thrilled.

In 2013, my average laps time for the three endurance oval workouts in May was 49 seconds.  In 2014 it was 45.2 seconds.  In 2013 my average lap time for the two interval workouts I did was 45 seconds; in 2014 it was 43.4.  To have achieved these improvements in lap times, while also increasing my number of workouts for the month by about 75% (I think; it's been a long time since I've done that kind of math) feels pretty good.

So yeah, I'm happy with how things are going.  Of course, lap times in inline practices are only a benchmark; the real goal is to improve lap times in long track races next winter.  But I can't help but think that I'm heading in the right direction to make that happen.

And now it's June, and there is a lot of fun stuff to look forward to this month (in addition to the start of summer vacation, which will begin June 12, not that I'm counting the days or anything).  I plan to stick with the goal of 3-4 (oops, guess I increased that, didn't I?  CrossFit is just too much fun!) CrossFit workouts per week, plus the three oval skates, a recovery/trail skate, and a day off per week.  Once school is over I should be able to do a two-a-day once a week to make this happen.  In addition to the standard CrossFit and skating workouts, I'm doing the Granite Games Online Qualifier the first three weeks in June (kind of like the Open; workouts are released once a week and we do them in our home CrossFit boxes and then turn in the scores).  I have no illusions about how I'll do--especially if we have to do pullups, pushups, or toes to bar--but it should be fun.  And next Saturday I'm going to a whole-day inline clinic at the oval taught by world champion inliner turned Olympic long track skater Joey Mantia.  Should be fun and very informative.  Then on June 28 I plan to skate the Roll for the Roses 10K race.

So things are going well, June looks full but really fun, and once again, I have to say "so far, so good!" 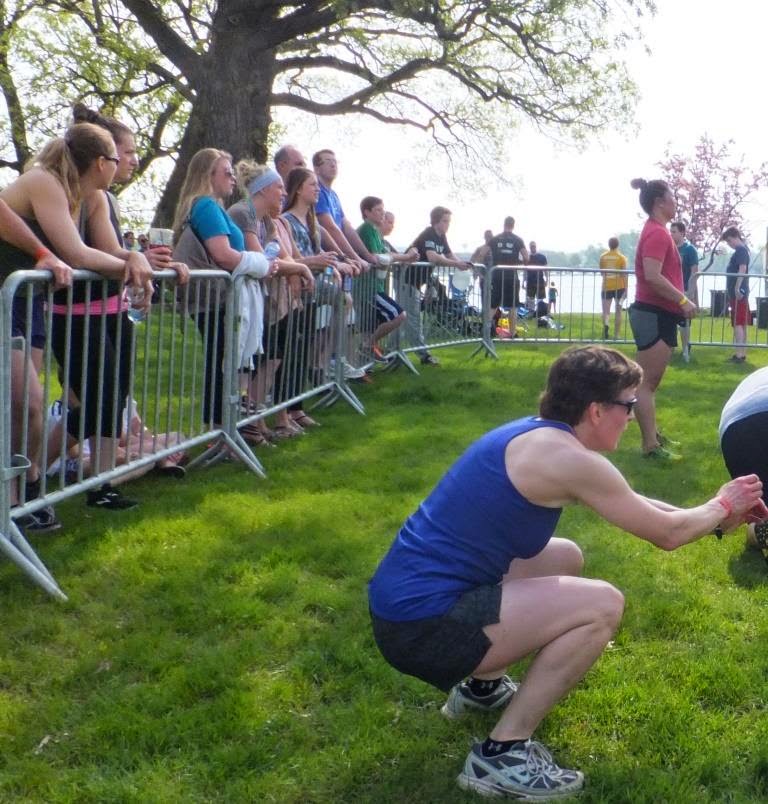 Another Murph squat picture, just because I can
Posted by Kaari at 8:24 AM