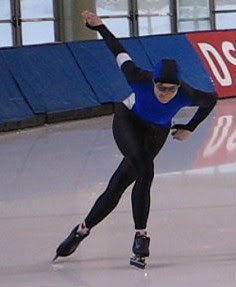 Nope, not feeling like an athlete yet. Don't want to dwell on the bad workout, though...so I won't. On to something more entertaining...
"So," you might be wondering (or maybe not), "what's with the belt on the skinsuit in the picture on the right at the top of the blog?" Well, I'll tell you...

TieGuy has spent an inordinate amount of time telling me to “lose the chicken wing.” You can see it illustrated nicely in the above picture—the left arm out away from the body, as though I’m a lycra-clad barnyard fowl attempting to take flight.

So what’s wrong with the chicken wing? Well, it’s not aerodynamic, and it tends to lead to one “bobbing” ones’ shoulders in the corner, as the hand slips off the back. I skate with one arm up regardless of the race distance (most people swing both arms in the shortest races and put both on their backs for the straightaways in the longer distances, but I find that the less things I have to master, the better), so I have a lot of opportunities for wingin’ it.

TieGuy tried lots of strategies to eradicate the wing. Until he moved out of state last fall (some lame excuse about a job opportunity) and started coaching by remote, we used to use FRS radios at practice (“walkie talkies,” for those of you without technically correct Hubsters). I became quite accustomed to hearing “lose the chicken wing” chanted into my earbud, but the thought never quite made it to my left arm. After a couple years of this, TieGuy was forced to try other tactics.

Once, as I exited a corner, he said “did you know that Kentucky Fried Chicken serves grilled chicken now?”

“Why is he bringing that up now…oh!” and I pulled in the wing.

Another time, when practicing on inlines on an otherwise deserted oval in the summer, I came out of a corner to see TieGuy (tie and all) hopping strangely about the track. It took me half the straightaway to realize he was doing “The Chicken Dance.”

Even this was not successful in eradicating the wing,though, and a couple days later I coasted up to TieGuy after an interval, to find him unbuckling and removing his belt.

Turns out he just wanted me to try using what I now refer to as a “string thing”--a string around the waist to help locate and anchor the left hand on the back. I tried it with the belt first and it seemed to help, so I got a more high-tech solution—an old skate lace. It has a special slip knot so I can adjust it easily; it has to be loose and therefore easy to get my thumb into and out of, because my protective responses are a bit sluggish even when my hand isn’t essentially tied behind my back. I already have one bad tooth from a start-gone-awry faceplant; I’m not looking for another.

So I use the string thing, in workouts and in races (but not during trail skates. There’s a much greater likelihood of needing to use my protective responses in trail skates). I’ve noticed that the ratio of string-thing-usage among male and female skaters is approximately 10:1 in favor of the women; maybe it’s not macho to skate with a string around your waist.

At any rate, it works, and most of the time, the wing is now tucked aerodynamically along my back.

One aspect of technique mastered, 75 to go…