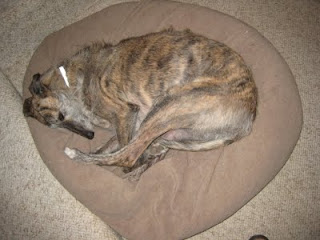 
The MinPin has left the building.


I, as chief puppy-walker, pee-cleaner, and "stop that now" enforcer, am relieved. The Hubster, as chief Tolerant Spouse, is relieved. No one, however, is more relieved than our dog Keira.
Keira is a 5-year-old "American Staghound," a mix of Greyhound and Scottish Deerhound. Her lineage would indicate that she combines the speed of a Greyhound with the toughness and stamina of a Deerhound. Instead, she combines the energy of an elderly, overweight toy poodle with the stamina of an asthmatic Basset Hound. So laid back she's usually horizontal, when Keira does run she's a sprinter (but I love her anyway); her chief goal in life, however, is to find a nice spot for a nap.


This, of course, is in direct conflict with the chief goal of a MinPin puppy, which is to wreak more havoc than one would think possible for something that weighs less than 3 pounds, and to wreak it in as little time as possible. Within 30 minutes of her arrival, puppy Belle had stolen Keira's toys, tried to steal her food, peed on her bed, barked in her ear, pounced on her tail, and, in a vain attempt to get Keira to play, pawed enthusiastically at Keira's beard about 20 times (both my parents' MinPins are inordinately fond of Keira's beard).


Keira was not amused. Patient and tolerant, but definitely not amused. And when, after 48 hours of MinPin-fueled aggravation and sleep deprivation, Keira realized that the puppy had left, she literally did a happy dance, prancing and wagging and bounding clumsily about.


And then she went to sleep on my slideboard. 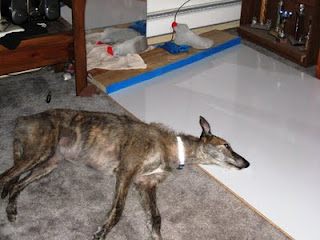 As for the skating...I thought, for a brief, exciting moment Tuesday, that the bottom had gotten lower. Most 47-year-old women are not remotely interested in achieving a lower bottom, but I am. And not in the usual skating sense, either.


In speedskating, the lower you can get (by bending your knees and lowering your butt, not by bending over at the waist), the more effective your push will be and the faster you'll go. I am a notoriously "high" skater--Coach TieGuy has spent a lot of time intoning"get your butt lower" during practice (I always had to fight the urge to tell him that, if he'd just be patient, time and gravity would take care of that.)


But that's not the bottom I'm wanting to lower. No, I'm referring to the artificial "bottom" that's been preventing me from skating hard lately; the one that makes me feel that, no matter how hard I twist the throttle, I won't be able to use everything in the engine. And Tuesday, it seemed as though that bottom had gotten a little lower. I had some aggression in the corners, some snap in the straights, some lap times that didn't want to make me toss my skates into the nearest pond and take up shuffleboard or something. Yesterday, though, the bottom was right back up there again, saying"nope, you can't go any faster" and causing me to turn in interval laps slower than my usual warm-up laps. I should be incredibly frustrated, but the sad truth is, I'm starting to get used to it.
But now it's Thursday morning, and my "recovery week" has started. No skating until next Wednesday--just whatever "fun, keep moving" activities I want to do. Plenty of time to obsess over my data from past workouts, to Google possible reasons for my impaired performance (since thyroid levels seem to be more or less back up to normal now), to convince myself that when I step back on the track Wednesday morning I'll be able to skate hard again.