This Weekend Should Be Interesting

Why should this weekend be interesting?  This picture says it all: 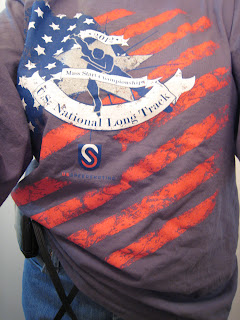 First, the shirt.  It says (if you look closely), "Mass Start Championships  US National Long Track." (And I must say it's one of the cooler skating shirts I've gotten.)

Now for those not familiar with speedskating, long track racing comes in two flavors: metric and pack (or, as our Canadian brethren like to say, Olympic style and mass start.  And be sure the "a" in "mass" is the broad Canadian "a," not to be confused with the Canadian "eh," eh?).  Of the two flavors, I prefer metric--pack gives me a bad case of indigestion.  I'm  a control freak who (as I may have mentioned once or twice here) does not like to have anyone near me on the ice when I'm racing.  I have enough trouble keeping track of what my own body is doing, let alone worrying where someone else's is, what their strategy is, and how my strategy must change when theirs does.  Since drafting plays a big role in pack style skating, I can't usually just "skate my own race" without paying heed to anyone else, because the "anyone else" will just draft merrily along behind me, saving a significant amount of energy, and then pass me at the end.  Pack races make me very anxious.

So I haven't raced pack in five years, since the Nationals in 2007.  And in the five years since then, I have professed my dislike of pack to anyone who would listen.  This weekend, though, the US National pack style--or, as the shirt says, mass start--event will be held at my home oval, the John Rose in Roseville.  Since it's the last official event of the year, I decided to sign up.  There are seven of us in my age group, which is a lot of full-size women to be sharing the starting line, but so far I've been able to avoid any pre-event stressing about it.  I want this weekend to just be fun, and so far everything leading up to it has been--skating with my friends who are also going to be racing; comparing notes about who's in our age group, what everyone's strategy is, and so on.  (For the record, my strategy is "leave the starting line as fast as possible and skate every race hard, without paying any attention to what anyone else is doing, if I can.  If I can't,  do as I did in 2007 when I got boxed in during the 1000 meter--freak out, do something stupid, cut someone off, and get disqualified."  I think this strategy covers pretty much any scenario I might encounter during the races).

So that's the racing this weekend...five races over two days, during which I hope to have fun, avoid neuroses and anxiety, dodge the 12 other flashing blades I'll be sharing the ice with, and enjoy the atmosphere of a pack meet for a change.

Now, as for the second interesting thing, check out the black box on my right hip (you know, the one on the left in the photo).  It's a 48-hour Holter monitor, or EKG monitor.  Yes, I decided I want to know what (if anything) is going on with my heart. On Wednesday I got an "event monitor" from my doctor, which is a different kind of EKG monitor than the one I'm wearing in the picture.  I tried it at skating Wednesday and Thursday and discovered that it was not going to be workable.  With this kind of monitor you have to push a button when you are having the arrhythmia, to start the recording--and pushing a button on a small device on your waistband while you're skating is a bit tricky even if you're not a klutz.  So my doctor suggested the Holter (which I've had at least three times in the last 20 years), since it keeps a continuous recording of every heartbeat, and needs no button-pushing.  I think it's definitely the best way to go in this situation, although it's a bit cumbersome to have five wires stuck to various parts of your chest for 48 hours (not to mention not being able to shower between day one and day two of racing!).  Hopefully I'll get some good information from it, though.

So there you have it--pack racing and EKG's.  Should be a fun weekend!
Posted by Kaari at 3:51 PM