I Survived the Pack

Well, I made it through Pack Nationals.

The weekend started with me arriving at the oval really early.  I like to stake out my spot on the bench before anyone else gets there...think I succeeded? 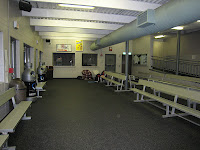 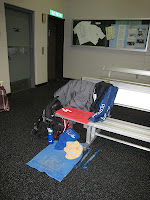 As always, I have a LOT of stuff.

I also figured I could use any extra time I had to do some mental work on conquering my pack neuroses.  And initially, I thought I had the mental aspect of pack racing under control.  My first race on Saturday was the 1000 meter, two-and-a-half laps.  As I toed the starting line with the six other 40-49 year-old women, I thought "this isn't so bad, I can handle this."  When the starter said "ready," I thought, "I'm fine, no problem."  When the starter fired the gun, the true reality of pack racing suddenly hit me--there are people everywhere!   Several cuss words raced through my mind in quick succession and I realized that I have absolutely no ability to do a start with people 18 inches from me on either side.

Eventually, of course, I did get going.  As I scrambled down the track attempting to settle into some sort of skating rhythm, there was one skater in front of me on the inside, and another cutting across in front of me from the outer to the inner.  I yelled to let the one cutting across know that she was coming awfully close to me, when suddenly there was a muffled exclamation and she wasn't there anymore.  Hmmmm, not a good start to the day.  Another 20 yards or so, though, and I had gained clear ice, and was able to skate the rest of the race "like a metric"--in other words, time-trial style of going as fast as I can for the distance, rather than using pack tactics to take advantage of the draft, trying to respond to others' strategies, etc.  I really have no ability to execute any pack tactics whatsoever, so it's best if I get to clear ice and just skate hard.

After the race, I approached the skater who had cut across and asked if she fell.  She had, and it turns out she thought it was my fault, since she was in front when she attempted to cut across.  Upon being thus accused, of course, I did what any self-respecting person with Obsessive Compliance Disorder would do--I sought out the nearest authority figure to confess to.  The corner worker I talked to said I hadn't done anything wrong, though--the person in the lead, as in Nascar, track racing, and freeway driving, is obliged to ensure that they have appropriate space to complete the maneuver before cutting in front of someone.

So, "not guilty," but still stressed.  Not 20 seconds into my first pack race in 5 years and I've already had "pack crap" happen.  I feared for what the other four races might bring, but they turned out OK. I pretty much followed the same strategy on all of them: take as much time as I needed to work past those who have a faster start than I do, then get to clear ice and skate like a metric.  I did win all five races, but had quite bad times in all of them--the worst time, in all of the distances, of the last 4-5 times I'd skated those distances at Roseville.

True, Saturday it snowed, which makes the ice slower: 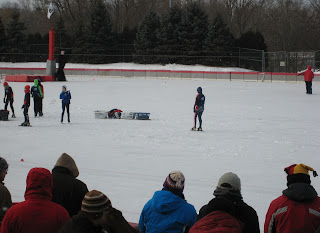 See the piles of snow on the infield?

It snowed part of Saturday, anyway, but not including the part that contained the 1500, which was my slowest race of the weekend but was skated during the best conditions. 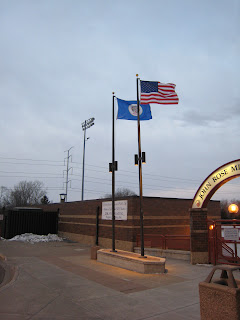 Not what I want the flags to be doing...

Wind also, of course, makes for slower conditions...but still, I wasn't too happy with my times.

Which leads me to realize, once again, that I am truly a metric skater.  Times really shouldn't matter in pack races--it's the place that counts.  Still, I found myself hurrying to the "Wall O' Times" after every race, because without numbers I really had no idea how to quantify my race.  I lamented the lack, in pack, of lap times...did I truly die in that last lap of the 1000, or did it just feel like it?  Was my 3000 normal, or the "what's going on is it heart arrhythmia or something else" pattern of slower at first/speeding up at the end of the race?  The group that put on the races did a fabulous job of getting the finishing order and everyone's total time for each race posted quickly, often before I even got my skates off after my race, but pack simply doesn't include lap times and I really felt the lack. 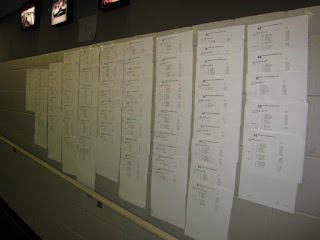 Still, it was a good weekend.  It was fun to hang out with other masters competitors between the races; the past couple years I've helped with timing the races which, while enjoyable, doesn't allow me any time to talk to my skating friends.  I ended up doing the 8-lap, for-fun Team Pursuit race at the end of the weekend with Cross Boy (he's not cranky, he just races Cyclocross) and Hawkeye Boy, which was a blast (thanks for the tow, guys, and I'm sorry I slowed you down!)  And I managed to successfully wear the Holter monitor all weekend without it interfering with my racing (I ended up wearing in around my neck, under my skinsuit, rather than on my waist, and it didn't get in the way at all).  I didn't feel any clearcut episodes of what I assume are arrhythmia, but did have a couple of suspected ones, so we'll see how the results come back in a couple days.

So anyways, I'm now National Champion in the women's 40-49 age group.  Here's the obligatory blurry cellphone pic to prove it:

Really, that's me in the middle, honest.  You can tell it's me because I'm wearing the same hat I wore last time I won Pack Nationals, back in 2006.
See? 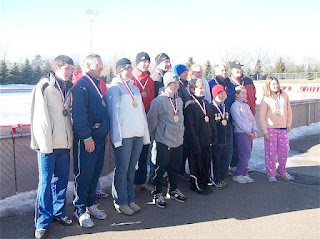 Towards the right, back row.  Same blue hat.

The upshot is:  I'm glad I did it; I hope I got some arrhythmia data; and only time will tell whether I ever end up skating pack again.
Posted by Kaari at 5:36 PM