No, this isn't going to be some "deep" post about life transitions, or even skating technique transitions.  You should know by now not to expect "deep."  No, this is merely (as promised), a post about my new skating glasses.

Which have "transition" lenses.

I need to wear prescription glasses when I skate, since my over-40 eyes no longer accept contacts as a part of their reality.  For the last 5 years I've had a pair of prescription glasses with transition lenses, that are dedicated to skating.  They look like heck, but work OK...except that they really don't block the wind well, and the bows tend to loosen up with use, which requires me to wear them with a "leash," which is a pain and makes them (and thus, me) look even dorkier than they'd need to.

So when I saw my sister's new prescription sunglasses with a snap-in foam liner that converts them to goggle-like wind blocking capabilities, I had to have some.  Since I usually practice at night but do local races during the day, though, my glasses would need to have transition lenses.  The cheapest glasses only came in black frames.  Fine, I thought, most sunglasses are black anyways; no big deal.

I forgot, of course, that most of the time my glasses will have clear, rather than black, lenses.  So, going from bright light to indoors they transition from "normal sunglasses.." 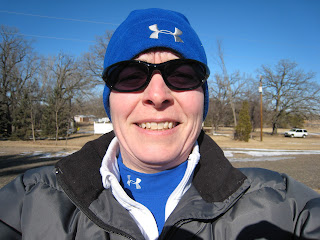 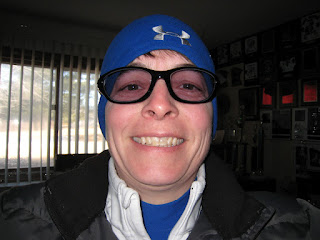 Oh, and here they are with the little foam insert snapped in... 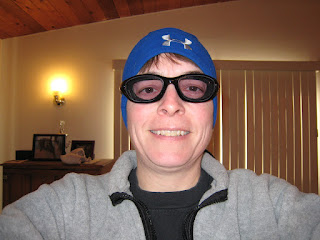 Really, there are no words...
(and why can't I get my hat--worn to protect you from the horrors of the "I spent my morning with my head in a skinsuit hood" hair) on straight?)

It used to be worse, though--ever since the lenses "transitioned" for the first time when I wore them at the time trials this morning, they have not returned to the full-on clear that they had been when I bought them.  I don't have a picture of the completely clear version, but it's just as well...in their clear state, they simply beg for me to be sporting a white lab coat and a chemistry set.  I can only hope that they never "transition" back fully.