Slow Down, You Move Too Fast...NOT!

It's been a busy week (thus accounting for my lack of blogging).  My parents were staying with us from Saturday night through Wednesday morning, which was a lot of fun but which meant that I spent the first half of my week cooking and socializing rather than skating.  Along with my parents, of course, came the pack of ankle-biters: Bronko, Birdee, and Belle.  As always, Keira enjoyed having doggy visitors but paid a heavy price in sleep deprivation (it's hard to get in her usual 23 hours a day of sleep when she has Min Pins bouncing around all the time).  Here, she's putting in some serious effort at reducing the deficit: 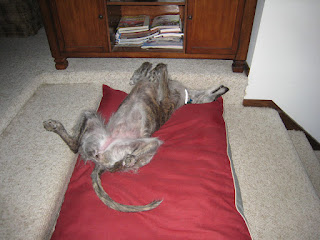 After my parents left, I resumed my regularly scheduled workouts.  Wednesday's endurance was slowish but not too bad; Thursday's tempos, like last week's workouts, were horribly slow but I felt normal.  This morning, I did my final oval workout of the week, four fairly long sets of intervals. The workout was made better by the fact that my friend Mel skated with me, and by the "too early for teenagers" Punk-free status of the skate park. On the minus side, though, it was hot and windy, and I skated pretty much the slowest interval workout ever. Last year I did this particular workout at an average of 45 second laps; this year they averaged 48.  Last year's max heartrate was 184, this year's was 196.  Last year I felt flat and sluggish and hypo (because I was!); this year I felt fine but was just--as I was last week--slow. And still strangely laid-back about it.

On the funny side, after we completed our 11.2K of intervals, Mel and I took a look at her extremely noisy bearings.  First, I picked up one of her skates and spun the wheels.  Three of the five stopped within about two seconds.  Then I took off a wheel and attempted to spin it while holding it by the bearings, between my finger and thumb.

I couldn't get it to spin at all.

I then proceeded to remove the bearings and tried to spin one.  It was completely locked up, and felt as though someone had dumped a load of Class 5 gravel in it.

"I think you need some new bearings," I said, which was probably the understatement of the year.

So next time I see Mel at the oval I'll bring her some of my used-but-still-spinning bearings which, given the fact that she finished every lap today about five seconds ahead of me despite skating on what might just as well have been square wheels, will probably mean that she'll lap me in our next workout.

And with my new laid-back attitude, that probably won't bother me a bit.