Last night, just for something different, I agreed to play in a hockey game.  Well, I might be using the term "hockey game" a bit loosely.  The Hubster had set up some ice time for people he plays broomball with--mostly the women from the women's team he coaches--to give hockey a try.  After he assured me that most of them had never skated before, and after I realized that, with races now on Saturday instead of Sunday, I could play a Saturday night game without messing up my time trials, I agreed to join the game.  After all, I skate 4-6 times a week and I played broomball for over 20 years (for the uninitiated, broomball is like hockey but played in squishy shoes instead of skates, and with a plastic broom and a ball instead of a hockey stick and a puck); how hard could it be to put skating and broomball together and call it hockey?

Pretty difficult, as it turns out.  There were, of course, the expected differences between speedskates and hockey skates (What?!  These things don't glide at all!  And where's the 3 inches of steel sticking out from in front of and behind my skates?  Someone has cut the blades off!).  Then there's the fact that my skating skills are pretty much limited to going straight and turning left.  While these are certainly skills that are relevant in hockey, there are apparently a few other things that are nice to be able to do, as well, including turning right, skating backwards, and crossing over in both directions. Oh, yeah...and stopping.  Turns out that in hockey, you can't just plan ahead and start slowing for your stop 50 yards before you need to cease forward motion.  Who knew?

Then, too, there's the fact that a hockey stick is not a broomball broom and a puck is not a ball.  Between the narrow stick and the tiny puck, there's a lot less surface area for contact than there is with broomball equipment.  Couple this with not being able to get to where I wanted to go very effectively, and there were a lot of missed passes.

On the other hand, it was nice to see that all of my old bad habits from broomball transferred seamlessly to the hockey rink.  I picked right up where I had left off with diving for pucks I had no hope of reaching, slashing peoples' shins as I flailed blindly for the puck, whiffing on passes and shots alike, and deftly flipping my hockey stick to switch from right-handed to left-handed in a skillful attempt to avoid having to use my non-existent backhand.

But it was fun, and everyone did a great job despite a lack of skating experience.  We actually managed to play a semblance of a game, and I don't think there were any major injuries.  Still, I'm a bit sore today, and it didn't help that the game ended at 11 pm and the post-game festivities didn't end until 1:30 am.  A bit past my bedtime.  Today is a good day to put into practice some other advice that I got yesterday at the races, this time from Sprinter Boy.  Despite his young age (35), he's a big proponent of recovery exercises and he's convinced me to dig out my foam roller and rolly stick and try to whip some muscles back into shape.  And after time trials and hockey yesterday, there are a lot of muscles to choose from.  Good thing I don't have to skate again until Tuesday.

Here's me in my old broomball days... 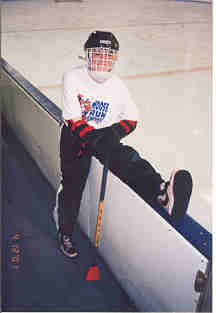 And in last nights's hockey game... 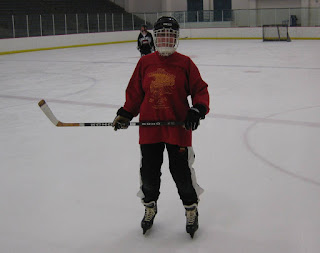 The Hubster pointed out that I somehow managed
to "ankle skate" in stiff plastic hockey skates.

So it was fun, but I don't think I'll be giving up speedskating to switch to hockey any time soon...