Yesterday we had the usual Saturday morning time trials at the oval. I had signed up for the 500 and the 3K but by the time I got to the oval at 7:45 Saturday morning I was thinking the 3K might not be such a great plan, for a couple of reasons.  First, there was the previously-reported Short Week.  Some might look on only one workout in the week leading up to an event as a "taper," but when you're out of shape it's best to call it what it is...another step down the descending slope  to "slow."  Second, there was this... 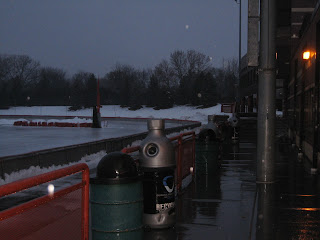 Yes, it was raining.  In Minnesota in December.  Our lovely Winter Wonderland was slowly turning into Winter SlopFest--and I was afraid the oval was about to follow. Seven and a half laps in the rain on potentially soft ice with a bad hamstring didn't sound like a good idea, so I went upstairs to the officials' room and snivelled my way out of the 3K and into the 1000, leaving the option open to scratch altogether if the hammy misbehaved on warmup. 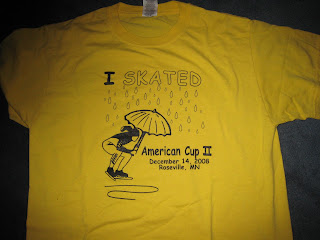 Skating in the rain is not necessarily a disaster; the oval refrigeration equipment does a pretty good job of keeping the ice hard, so unless there's a huge amount of water and excessively warm temperatures it's not too bad.  Still, I thought it best to err on the side of caution--but at least my "caution" only involved downgrading my race from 3K to 1000; as it turned out, every one of the other masters skaters who had signed up to race decided that "caution" involved "turning off the alarm, rolling over, and going back to sleep."  Wusses.

So I went out for my warmup solo.  It was indeed raining, see? 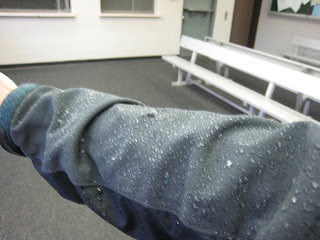 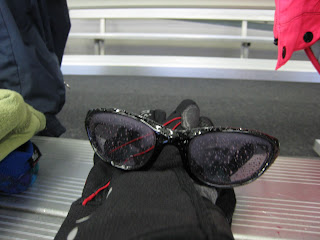 (It was kind of funny; when I came in planning to take the "water on jacket" shot, everyone I walked past kept brushing the water off of me--I kept thinking "stop, you're ruining my shot!")

But the ice was decent and the hamstring fairly uncomplaining, so I decided racing was a go.  Then one of the officials approached me and said I was the only 1000 meter skater and they had a solo skater in the 1500, so would I mind...  I said no problem, switch me to the 1500. I have two other 1500's from Roseville this year, so it would be good to see how I'm doing as the season progresses.

The 500 was first.  I felt fairly good and it went OK, but my time was, once again, a 52.  This is slow for me but still in the "reasonable" range, so I was fine with it.  The 1500 also felt fine; I kept my technique together (Mel, who was watching from the warm dry observation deck, confirmed this); there were no PVC's; and the lap times, generously shouted to me by Russian Coach on the backstretch, showed only a nice, reasonable one-second die per lap.  And my final time of 2:42 was three seconds faster than my last 1500 at Roseville a few weeks ago--but still six seconds slower than my slowest Roseville 1500 from last year.  Sigh.

Still, it was fun.  And my hat (yes, I actually was wearing one between races; it was an Epically Bad Hair Day) is off to the volunteers, who stood in the rain for hours so that we could race.  Thanks guys! 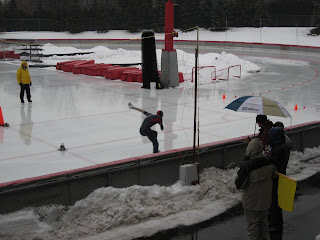 So today, it's off to the Roller Dome for a recovery skate with Energizer Bunny, and then I'll see how the hamstring feels next week.  I need to get in some endurance work before the 5K in the Masters Single Distance meet in early January, or it's not going to be pretty!