(See, the marathon yesterday was in the Dome, and it's close to St. Patrick's Day, and the race didn't go well...yeah, you're right, if I have to explain it it's not funny...)

As I already gave away in italics, yesterday's RollerDome marathon did not go well.  Actually, given how the rest of the season has gone, and given my lack of marathon-specific preparation, I'm not surprised.  And I wasn't doing it anticipating getting a blazing fast time anyway (I know better than that); it's just that this race is the last Dome marathon ever, and since I did the first one, back in (I believe) 2005, I felt it was only right to close the circle (oval?) on Dome racing by doing the last one as well.

Saturday was the perfect day for an indoor inline marathon: 35 degrees and raining. 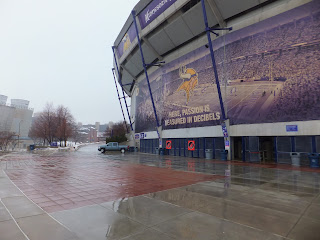 When I arrived at 11:30, the second wave of the marathon was entering its final hour.  There were spectators spectating... 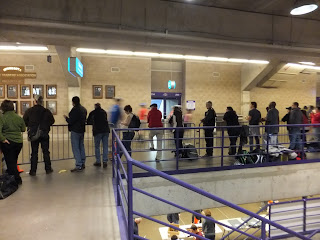 See the blurry skaters going by? 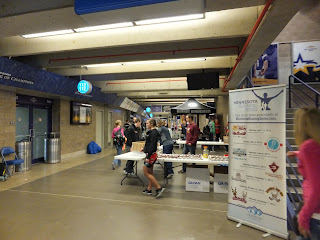 You can see the doors into the stadium on the left

...and teams beginning to prepare for the Team Time Trial at 1:30. 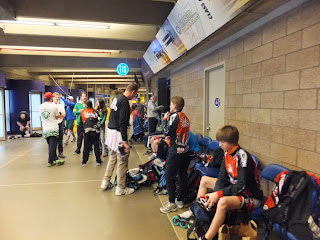 The first thing I did when I entered the Dome was to check out the results from the Pro race, held earlier in the morning.  My friend and fellow long-track skater Melissa had competed in the Pro women's class, and I noted with satisfaction that she had won the event for the women (go Mel!), and a local Long Track Fast Guy (who I had watched grow up at the John Rose Oval since he started skating at about age 10), Paul Dyrud, had won the men's Pro race.

"Good," I said, "a couple of long-trackers won the Pro events."

A Max Muscle teammate who had also been perusing the results turned to look at me in confusion.

Clearly, we have a ways to go in integrating inline with long track!

So far, race day was starting off well.  I was still feeling a little residual dizziness from my night of horror in Salt Lake City, but it had greatly improved during the day Friday and I didn't really expect it to be a problem in the race.  Due to my "the oval is closed" week of almost no skating or working out, my legs were feeling good.  And I had a great team to skate with: "I've Only Skated About 3 Times This Year and Yet I Will Kick Your Butts," who you met back in this post; "Fast Guy," who you met here; and Machine 1 (who I had skated with before) and Machine 2, (who I hadn't).

As we milled around waiting for our race to start, I filled my teammates (we were designated "Max Muscle 3," to differentiate us from the other two--faster--Max Muscle teams) in on the plan.  In the Team Time Trial format, teams must start with 5 skaters but only 4 are counted at the finish.  Therefore, one skater from each team can drop out without penalty. This, I told my teammates, was likely my destiny.  And despite their protests that we'd agreed on a "no drop" skate, I insisted that they keep the option open.

I'm still not sure whether I was just being realistic, or whether I doomed myself to a mental meltdown mid-race by my complete lack of confidence in myself pre-race.

Finally, it was time to start.  The 10 Time Trial teams were sent off at 15-second intervals in a randomly determined order; we started seventh.  After the start, it was just a matter of skating 70 times around the oval concourse.  Our plan was to do roughly 75-second laps, which would put us at a final time of around 1:25.  Since I had skated the North Shore Inline Marathon in 1:26 last September, this should theoretically be a reasonable time for me--but still, I had my doubts.

We set off with Machine 1--deemed most likely to not get over-excited and throw down some early laps that would leave us all gasping for breath--in the lead.  And he lived up to our expectation; after a "we're just getting rolling" lap of 82 seconds, he started turning in steady 73's.  And Machine 2, when he took his turn four laps or so later, proved just as steady (and, being nice and tall, provided a fine draft for me, who was lucky enough to be behind him in the paceline).  Then it was my turn, and then I've Only's turn; we both kept it at 73's, although we each only pulled two laps to the guys' four or five.

And then it was Fast Guy's turn.  And, true to his name--and despite being in the 60-plus age class--he succumbed to youthful  enthusiasm and turned in a 68 for his first lap.  Which led to us scrambling to catch up, and shouting dire threats if he didn't slow down and let the young 'uns keep up.  (I'm pretty sure that at one point, when he still wasn't slowing, I yelled something about needing an electronic collar for him so we could give him a taste of "Dance, mailman, dance" ala the old TV show "Cheers."  Sometimes my desire to be a smartass overcomes my need to save my breath for skating.)

And that's how the race went for the first 30 laps or so.  At first it was a bit tricky because there were still a couple "solo" skaters finishing their marathon; they kept to the right, and we were frequently passed on the left by two or more teams in quick succession and sometimes were also passing another team and a solo skater while simultaneously being passed; but eventually, the solo skaters finished, the teams sorted themselves out, and we were able to focus on skating.  Here we are, enjoying a nice unpopulated stretch of race course: 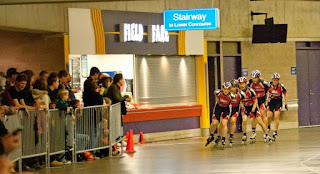 Yes, that's me at the back of the paceline, rockin' my dorky skating glasses.

Up to about 30 laps, I was feeling OK.  The first couple laps the wall seemed to be going by awfully fast, which I attributed to my dizziness issues.  Once that settled down, though, I was able to maintain the pace with what felt like an appropriate and sustainable amount of effort.  And, due to Coach TieGuy and Sprinter Boy both having mentioned that I need to relax when I skate (my skating style is not referred to as "all force no grace" for nothing), I was trying very hard to stay relaxed and efficient while skating (is "trying hard to relax" an oxymoron?).

And for 30 laps, it seemed to work.  I was keeping up, doing my (short) pulls at a reasonable pace, and feeling OK.

And then things went downhill.  I still really don't know if it was mostly physical or mostly mental.  True, I did start to get PVC's at around this time (Mel was unfortunate enough to be watching the race from the exact place where I felt the first PVC, and thus got to witness my verbal opinion of my heart arrhythmia starting.  Oops.).  And along with the PVCs came the familiar chest pain, which I had been feeling very frequently throughout the week and which my doctor is unconcerned about but which nonetheless makes me a teensy bit nervous when it's happening when I'm only halfway through a 26-mile race.

So somewhere around lap 35 the doubts started...Maybe I can't keep this up.  I'm really tired.  Damn PVC's are making this harder than it should be.  Maybe I need to drop out.

And once the doubts start, it's all over.  At that point you can't figure out whether you truly can't do it anymore, or just think you can't--and it really doesn't matter.  Because if you think you can't...you can't.

So when my team pulled into the mandatory water stop at 40 laps, I gulped a cup of water and then explained my situation.  I'd do my best to keep up but if I got too tired I'd let the skaters go in front of me as they rotated off the front; that way, if I got dropped, I wouldn't gap anyone else from the pack and force them to sprint to catch back up.

My kind teammates protested, but in the end that's what we did.  Machines 1 and 2 pulled their nice consistent laps, then I pulled--one lap--and then I've Only and Fast Guy (who still was strong enough that we needed to yell him back to a more reasonable pace) took their pulls.  And when Fast Guy finished his pull and drifted back, I knew it was time.  For the past few laps I had been telling myself "just one more lap; just keep it up for one more lap"--but now I didn't think there were anymore "one more laps" in me.

So Fast Guy eased into the paceline in front of me, and within a half lap I was done.  I think I made it just under 50 of the 70 laps.

I finished the lap back to the spectator zone standing up and barely moving.  By the time I got to the line of people cheering the still-racing teams, I was feeling dizzy and needed to hijack a spectator's chair.  I've never felt so lousy after a marathon (or two-thirds of a marathon), and I spent the next 10 minutes or so just sitting, trying to recover and occasionally mustering the energy to cheer my teammates as they went by.

My team finished in 1:27, eighth out of the 10 teams.  They did a great job maintaining their pace; I timed a couple of their final laps at 75 seconds, right on our target pace. I felt bad for abandoning them, but would have felt worse if I'd stayed because the way I was feeling, we'd likely still be skating. 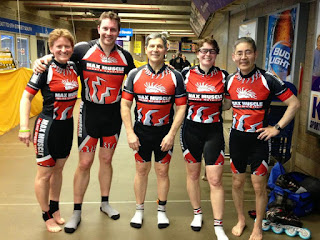 I've Only, Machine 2, Fast Guy, Me, Machine 1
(this pic and the racing one are courtesy of I've Only)

And so the skating season has ended. I'll have to do a season recap post, when I can find a way to coherently express the hideousness that was the 2012-13 season.  In the meantime, I'll leave you with a photo of the final Metrodome Inline Marathon t-shirt (I'm glad it doesn't say "finisher" on it anywhere, because compulsive honesty would probably compel me to grab a Sharpie and scribble "2/3" on it). 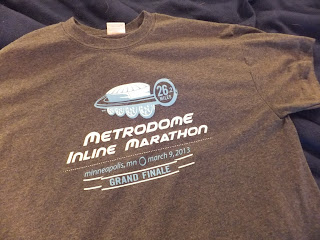