Nope, I'm STILL Not an Inliner

Race Report:  Minnesota Half-Marathon
Ooh, my first race report!  This is bound to be long...

As planned, I got up a O'Dark Thirty this morning, threw my stuff in the car, and drove through McDonald's on the way to St. Paul.  I'm used to doing long track ice races, in which I know the venue, the Ovals have their own parking lots, and "check in" in the morning literally means putting a checkmark next to your name on a list.  Consequently, it's not surprising that I got lost on the way to the parking lot, and made what was perhaps a tactical error in the "check in" department.   My sister and I had wanted to get our race packets the day before in case there were long lines at the pick-up in the morning, so I had driven all the way into St. Paul yesterday to pick up the packets pre-race day.

We needn't have worried. 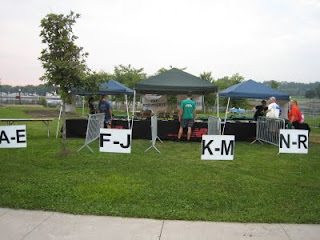 (I did stop in the registration tent to ask where we should pin our numbers.  "Oh," said the cheerful lady at the registration table, "since you have chips the numbers aren't used for timing.  We really only need them if you crash, so we can identify your unconscious body.  So you can pin it pretty much anywhere.")

In long track races, you bring all your own sustenance.  I was happy to see that here, there was plenty of food all ready for post-race action: 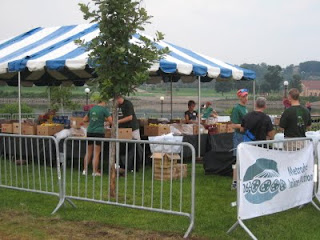 And unlike at most long track races (although my home Oval in Roseville can be spectacular at night with the Christmas-light-lit trees surrounding it) the scenery was beautiful: 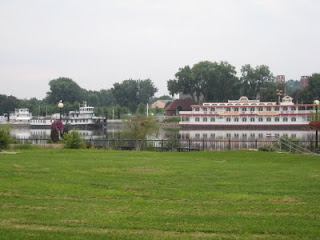 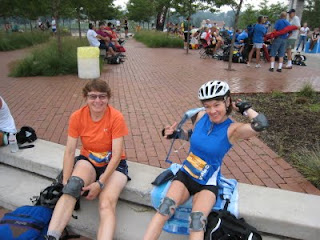 We have a lot of stuff to put on. 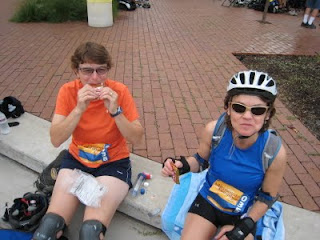 And in.  Mocha Clif Shot, anyone?
And then we saw our friend "I Rarely Skate and Yet I Will Kick Your Butts", who we had not known was racing.  Cool!  We had plenty of time to get caught up on each other's lives as we continued to don our mountain of gear. 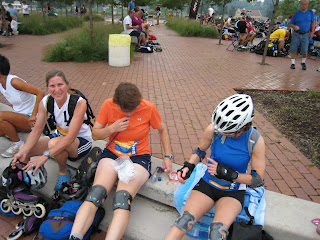 CamelBacks and inhalers and duct tape, oh my!
Then it was time to send Sherpa Boy off with our backpacks and cameras, and head to the start. 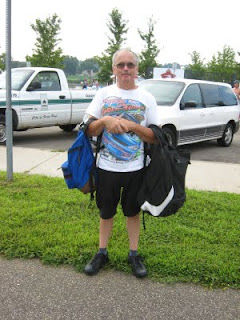 Sherpa Boy is a very tolerant and patient individual.
We had a long wait at the start.  I haven't started in the Open wave of an inline race before; when I used to race I usually did so in the Advanced class, which typically meant I was sharing the starting line with 20-60 other women of fairly similar skating ability.  Therefore, it wasn't hugely critical to line up in just the right spot; we would all be launching at pretty much the same speed.  This time, in the Open wave, about 400 other skaters and I were trying to figure out who we should be in front of and who we should be behind.  Since Energizer Bunny and our friend I Rarely Skate and I were also planning to skate with 2 other friends, there were 5 of us trying to find a nice roomy place to stand.  Here's where I really missed my long track racing--I wanted my own lane all to myself, and I was getting pretty irritated at all the skaters around me who kept oozing forward to fill any available open space around me.  Really, people, have some consideration for personal space! 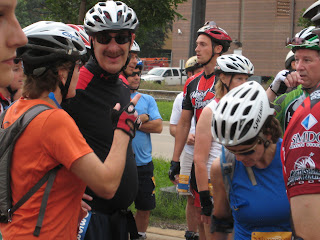 Here we are at the start.  Yes, that's me in orange.  No, I don't know the guy I was talking to.  No, I'm not sure why I was shaking my finger at him.  I don't think I was chastising him for standing too close.  I'm pretty sure.
See how tightly we were packed in there?  Like a bunch of little helmeted sardines. 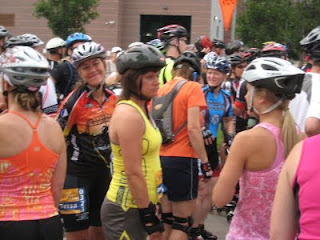 That's our other friend, "I've Only Skated About 3 Times This Year and Yet I Will Kick Your Butts," in the blue skinsuit (with a rather unfortunate look on her face).  The little bugger won our age group!
Finally it was time to go.  First the pros took off.  They looked like this: 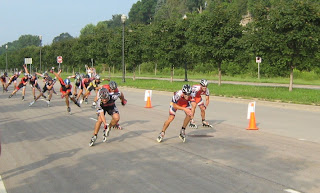 Actually I think this was from the pro finish, but whatever, they're still impressive!
Then we were off.  The Open wave started just as you would imagine 400 skaters of disparate ability and skating experience would start: it was a total "cluster."  (Don't make me spell it out for you; this is a G-rated blog...)  People on rec skates with tiny wheels, wearing jeans and skateboard helmets (these are generally not good signs in an inline race) were being passed  left and right by skinsuit-clad racers on 110 mm wheels.  There were no such things as pace lines; it was just an exercise in survival.  We 5 tried, simultaneously, to: a) avoid crashing, b) dodge slower skaters we were overtaking while also c) not cutting off faster skaters who were overtaking us, and hopefully, d) stay together.  We managed a-c, but it wasn't until at least a mile into the race that we achieved "d."  Finally we were able to settle into a paceline and skate.
The next couple of miles were fun, although I did notice that my brain does not seem to be cut out for longer events.  I'm assuming that "damn, 10 more miles to go" is not the appropriate mental response when one sees the 3 Mile marker.  We traded off the lead and had a pretty good pace going.  Then, somewhere around mile...I don't know, 8?...the others, Energizer Bunny, I Rarely Skate, I've Only Skated, and friend #4 (male), "Why Are All These Women Following Me" began to pull away from me.  In my highly motivated and competitive fashion, I said "See ya.  Have fun." and immediately dropped back to a more comfortable pace.  It seems that I am not motivated much by seeing my friends skate away from me; no, I need someone yelling lap times at me to really light a fire under my butt.
So I skated on, mostly by myself.  I don't think I had a draft at all for the last 5 miles of the race For the record, you save 20% or more of your energy by drafting off of someone, but since the "metric style" long track races that I compete in do not feature the opportunity to draft, I suck at it and really don't like doing it.  I always imagine the whole pace line taking a header when the first person in line trips, and since that actually happened to me once, I really don't mind not drafting off someone.
Along about mile 9, I began to notice a pain in my left heel/ankle area. A "blister is forming now" kind of pain. And by about mile 10, I could feel the skin layers in the blister separating each time I pushed with my left foot, and then re-adhering as I unweighted the foot.  Fun.  I was also, by this time, really regretting my decision not to wear a skinsuit. (I'm actually on the same inline team as I've Only Skated, so I have a couple of inline skinsuits. Even though I'm not an inliner).  Anyway, I had decided not to wear a skinsuit because I feel that a certain level of skating should accompany the full-on lycra look, and I was thinking that that level of skating likely wasn't happening for me today.  I had forgotten, though, what happens when you wear loose nylon shorts on a hot humid day.  Damp nylon has an affinity for vast tracts of sweaty flesh (like, oh, say, my thighs), and likes to stick to said flesh in very irritating fashion.  After freeing various (as Hubster likes to refer to them) "chunks of volupt" from the clutches of the nylon approximately once per 20 yards for 10 miles, I was truly regretting not donning the form-fitting "team colors."
Finally, though, the finish line came into view and, with a couple of muttered-under-the-breath curses at my blister and one last yank at my shorts,  I coasted across the line.  Sherpa Boy got some end-of-the-race pictures: 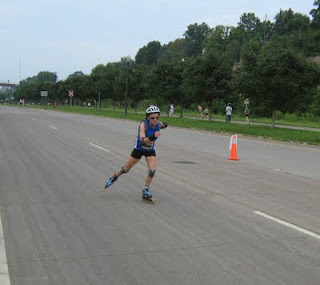 Here's Energizer Bunny nearing the finish line.  Can you believe she'll be 50 next month? 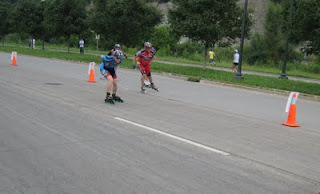 Here's our friend I've Only Skated (in blue) cruising in for the Womens 40-49 win. 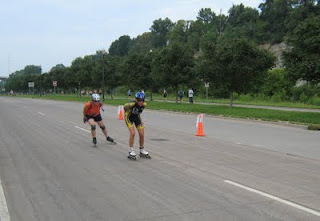 And here I am, trudging chunkily along (my, that's a flattering photo!).  Yes, the woman in front of me is in my age group, and yes, she beat me.
After the race I raided the food tent (gatorade, banana, two "energy buns," and potato chips.  You'd think I hadn't eaten in a week) and then went to change into my shoes.  It was then that I realized how much my summer hobby of reading athlete blogs has affected me...
One of the blogs I enjoy (listed in my sidebar) is "Steve in a Speedo? Gross!"  Steve is a local Minnesota athlete (mostly triathlons) with a great sense of humor, an engaging writing style, and a penchant for taking photos of some rather odd stuff.  So, as I peeled my sock off my blistered foot and peered at the ragged flesh, I found myself thinking "hmm, Steve would definitely have a picture of this in his blog, if it was his foot."  Unfortunately I had not yet repossessed my camera from Sherpa Boy, a fact that I lamented more when I stood up off the concrete step, turned around, and reached down for my backpack.
There was a perfect, lovely sweat-butt-print where I had been sitting.  Steve would likely call this evidence of "swass" (yes, I believe that's a contraction of exactly the two words you think it is).  I simultaneously realized two things as I stared at the butt-print: a) I would definitely have taken a picture of it if I had my camera, and b) clearly it is time for me to go back to work and stop spending so much time on the internet.
So here we are post-race: 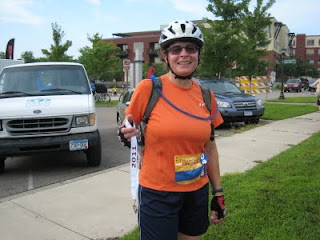 Me, looking fat and sweaty with my finisher's medal. 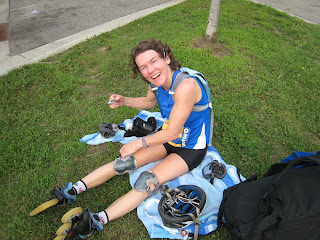 And Energizer Bunny, looking rather fresh and perky as she removes the duct tape from her knee pads (don't ask.)
We hung around for quite a bit eating, talking, and waiting for awards.  This is another difference from long track skating...there are so many people at events like this, and there is such a festive atmosphere.  I ran into about 10 people I know, there was a live musician entertaining us, and it was fun to people-watch all the athletes milling around (apparently compression socks are now the rage; this was not the case when I shuffled ran my marathon back in 1982.)  It's definitely a change from the laid-back long track atmosphere where a small number of athletes wander back and forth between the ice and the warming house or the spinning bikes.  Both events are a ton of fun in their own ways, though.
As it turned out, I've Only Skated won the Women's 40-49 class, I Rarely Skate was third, Energizer Bunny was fourth (dang, just out of the awards, as she often seems to be), and I was seventh.  As this was out of 40 women in the age group, I figured that wasn't too bad.
And then I went home and took a nap.
Posted by Kaari at 2:32 PM