I'm Still Not an Inliner

Despite my vehement protest in my previous post that I am not an inliner...today I signed up to skate the Minnesota Half-Marathon tomorrow in St. Paul 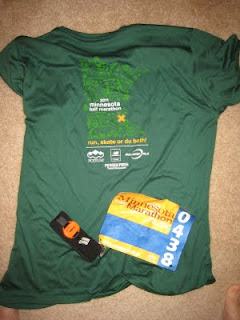 Proof: the shirt, the chip, the race number.
I've done this race probably 3 times, back when it was a full marathon.  Once (in 2004 or so) I skated it wearing an "event monitor"--a portable EKG on which you can record any errant heartbeats. (I've had arrhythmias my whole life; I skated a long track masters meet wearing an event monitor once, and once, when trying to diagnose what turned out to be my  thyroid problems, I drove to the Mayo Clinic where my cardiologist put a Holter monitor on me, which records every heartbeat for 24 hours.  Then I drove to Milwaukee, did a workout wearing the monitor, and then drove back to the Mayo to drop off the monitor.  Fun times).  Anyway, the race I'm doing has shrunk considerably since the last time I did it, and I don't just mean because it went from a full marathon to a half.  There are a lot fewer skaters in the event tomorrow, and a lot fewer vendors in the Expo today.  Kind of sad; it used to take a hour just to work your way through all the skate and clothing booths after picking up your race packet.
After I left the Expo, of course, I realized I forgot to ask a few key questions:  where does the number go?  Is there a "bag drop" so you can leave your shoes, etc. somewhere easily accessible? Oh, well...I'll figure it out tomorrow.
I plan to skate with my sister tomorrow, if I can keep up with her! I told her she's free to drop me and jump on a faster pace line if the opportunity presents itself, but I won't leave her behind if it turns out that she's going slower than I could.  Selfless?  No, just lazy...I'm not planning to do this thing all out.  Coach TieGuy is fine with me doing it but it isn't actually in my planned workouts, so I really don't want to hurt myself, either by crashing or by pushing too hard.  Lot of training left before ice season!
To that end, here is what I plan to be sporting at the starting line tomorrow: 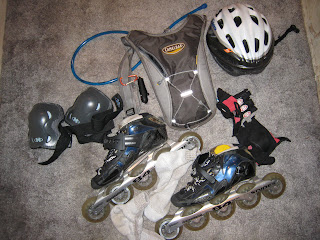 Yes, I'll be rockin' the knee pads, the CamelBack (I may remove the pepper spray, though) and the 5x84's.  (They have Bank Robber wheels.  Do those things even exist anymore?)  I have to wear the 5x84's, my old skates, because my Achilles is starting to hurt a bit and the old Vaypors, above, which only fit the 5x84 frames, are the only skates (of my 5 pair) that don't contact the Achilles at that spot.  They're so old and stretched out that I have to wear them with the hiking socks pictured above.  (For those who don't skate, most people now skate on frames with 4, 110 millimeter wheels.  My 84 mm wheels look tiny in comparison.  I use 4x90's on the Oval, but I don't want to switch to the really big wheels because I like to keep my equipment as consistent as possible from year to year.  Data, you know.)   I also plan to bring the camera...I can stash it in that nice zipper pocket on the CamelBack.  Don't worry, I won't use it in the race...
Despite the fact that the race is only a half-marathon, I felt that some day-before carbo-loading would be in order (again...don't tell my dietitian!).  So I made, and ate, a pan of sugarfree Cinnamon Rolls today.  Yes, you can make sugarfree Cinnamon Rolls--just use regular frozen bread dough rather than sweet roll dough, so that the bread part has almost no sugar.  Then you can use Splenda for the sugar in the cinnamon/sugar filling and the cream cheese frosting.  As to why you'd make sugarfree Cinnamon Rolls, well, the fact that I ate the entire pan in one day should be a clue.  I have a hard enough time stopping eating when the stuff is sugarfree and thus not quite as tasty nor as harsh on the ol' blood sugar; real sugar might as well be crack.  As my grandpa used to say, I have "no terminal facilities" when it comes to sugar.
I do, however (despite the fact that they are pretty much pure sugar) eat gels, blocks, and recovery drinks.  Which turned out to be a good thing.  Earlier this evening I was packing an old backpack with all my necessary stuff for tomorrow--in case they have a bag drop, I don't want to use my good skate backpack.  I was digging through my good skate backpack for the proper flavor/caffeine combo of Clif Shot for pre-race use (Mocha, with the full caffeine shot--I would have preferred the Espresso with 2 shots but those are always the first I run out of), when I encountered...my asthma inhaler.  That I had forgotten to switch to my old backpack.  Oops.  Wonder what else I'll forget?
So tomorrow, the plan is up at 5:00, take my full (not half!) dose of thyroid meds, throw my stuff in the car, drive through the nearest McDonald's (yes), and head for the race, where I'll meet up with my sister and a friend.
Should be a blast.
Posted by Kaari at 6:13 PM