THIS is Why I CrossFit 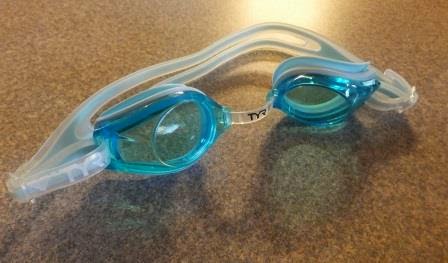 We all had a stage of life where we conquered seemingly insurmountable obstacles; achieved goals we could hardly believe; transformed ourselves into something our former selves would barely recognize.

Unfortunately, this stage mostly happened before we turned two and thus none of us remembers it.

Wouldn't it be cool if we could remember, though?  If we could experience again what it felt like to sit up by ourselves for the first time? To trade "scream and hope someone figures out what I want" for "I'll just crawl over there and pick up the damn thing myself? " To be able to walk anywhere we wanted without a hand to hold onto?  It would be so cool to remember how it felt to achieve something so seemingly impossible; something that we had no reason, based on our past experience, to believe that we could ever achieve.

Since I can't remember, though, CrossFit lets me experience this feeling again on a regular basis.

By the time you turn 50, most of the "wow, I can't believe I did that" moments seem to be gone.  I've made it through school (lots and lots of school);  I've gotten a job I enjoy; I'm married to the man I love.  There are a lot of big things that I've achieved in my life and that I'm happy about--but there are a lot more little things that I've never done, never believed I could do, and had long ago stopped attempting.  I had a view of myself, as we all do, that was built up through years and years of successes and failures--and by a year ago, at 49, that view was so pervasive that I had pretty much given up challenging it or trying to change it.  I was good at what I was good at (mostly "thinking" stuff) and I was bad at what I was bad at (mostly physical stuff), and while I might get a little stronger through skating workouts, or change my skating technique for the better by a small amount, I was pretty convinced that, as Popeye says, "I yam what I yam" (without the spinach though, at least until I went Paleo).

In the past year, CrossFit has challenged that view of myself again and again, because to my surprise I've discovered that, while I may not be a rock star at this stuff, and I may learn it more slowly and execute it more poorly that most of the people I work out next to in the box...nevertheless, I can do it.  Climb that rope?  Sure.  Pick 200 pounds up off the ground? Yup.  Do a pullup?  OK.  Do a Handstand?  Pass that jumprope under my feet twice while only jumping once?  Do a pistol?  Done, done, and done.  And today, I got to add something else to that list, and to change my view of myself just a tiny bit more.

There is a distinct possibility that we might be asked to swim in the Granite Games.  The organizers have hinted about it enough times that either a) they really are going to have a swimming WOD and they want to prepare us, or b) they're just messing with our heads.  Either way, though, I figured it would be silly--given the amount of time and energy I'm spending on training for all the dry-land WOD possibilities--to completely ignore swimming.  So I haven't been ignoring it, exactly...I've just been falling back into my "well, I can't possibly do that" view of myself.

I don't mean that I can't swim.  Oh, I can swim...if by "swim" you mean "put me in the pool at one end and I'll make it to the other end without resorting to sinking to the bottom and walking, or to using a life jacket."  I can even, thanks to my mom having been a swimming teacher for a while, execute some basic swimming strokes, most notably the side stroke and some aspects of what we called the "front crawl" back when I learned it.  What I cannot do, what I've never been able to do, is to do any swimming stroke while exhaling with my face in the water.

The Hubster kept saying "you mean you 'wont,'" but to me it was definitely "can't."  Whenever I tried to exhale into water I would panic, feel like I'm choking, start to inhale instead of exhale, and then really choke.  Call it some kind of weird phobia, but I've simply never been able to do it and I gave up trying long ago.

But now, well, now I had to give it a try.  I mean, I can climb a damn rope, right?  I can do a pullup (well, on a good day), right?  I never thought I could do those and I achieved them...how silly would it be to resign myself to doing the side stroke or a nice dog paddle for a possible swimming WOD without even trying to overcome my fear?

That's right...I did it.  It wasn't pretty and it wasn't fast, but I swam two lengths of my friend Mary's pool exhaling with my face in the water and turning my head to the side to breathe.  Just like a real swimmer (well, almost). 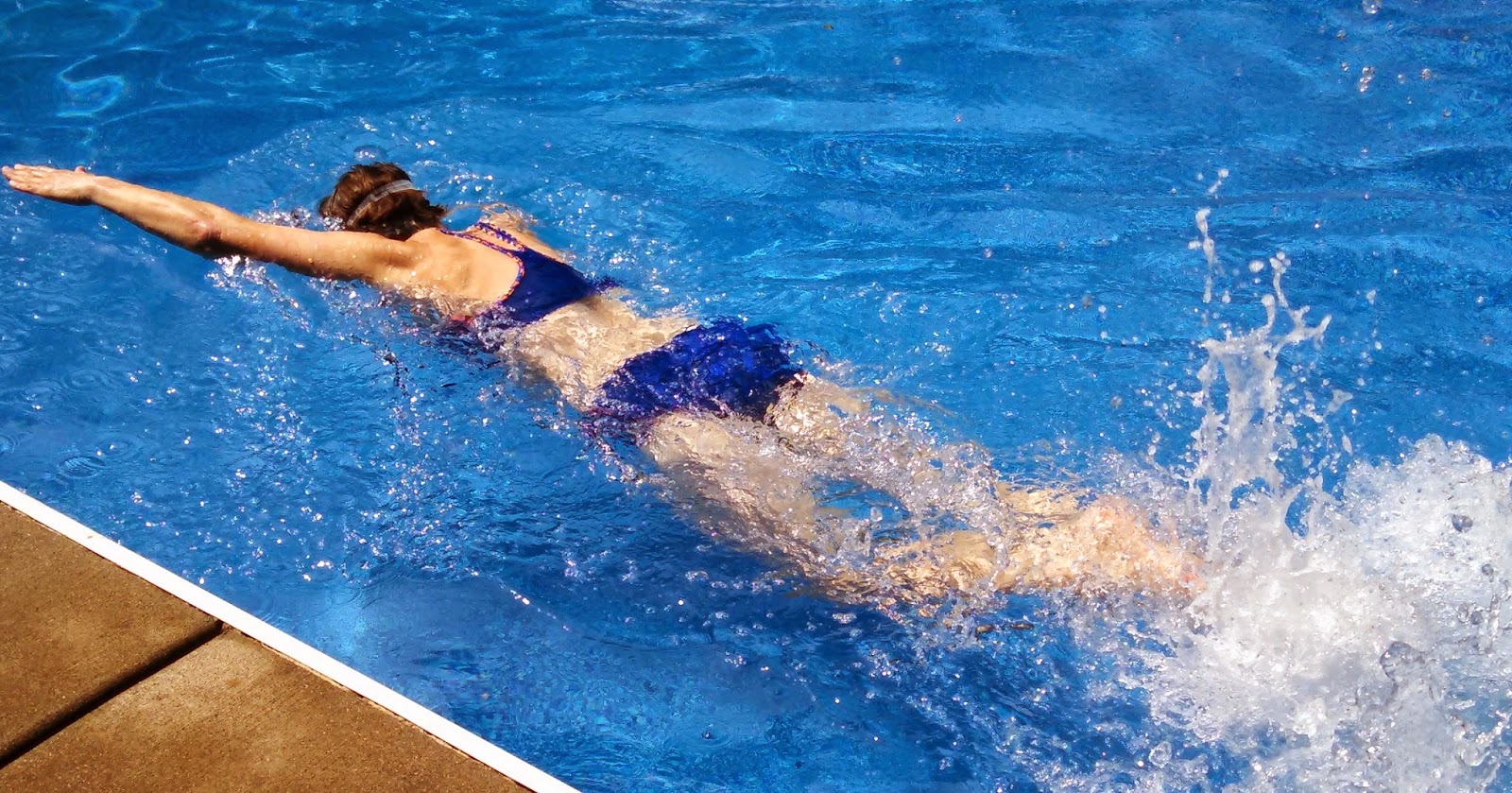 A sight never before seen--me swimming with my face in the water. 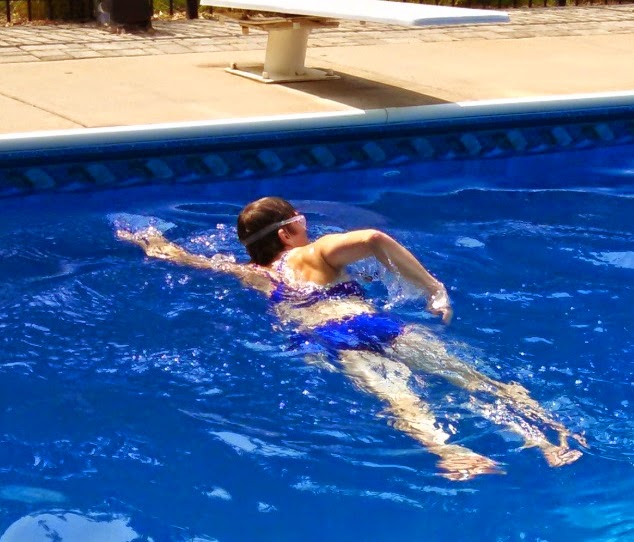 It may look like I'm swimming with my head out of water,
but I'm simply ensuring that I won't get a lungful
of water when I turn my head to breathe.

All the credit for this achievement goes to Mary.  Not only did she give me some coaching in the basics of swimming with one's face in the water-but she also suggested I try swim goggles (and lent me a pair).  Turns out my "exhaling into water" phobia was actually closely related to my "claustrophobic and being in a pitch dark room" phobia (that's why I carry three flashlights in my purse and no, that one is not likely to change any time soon).  Eyes closed plus face in water plus trying to breathe (even to breathe out) equals panic; add vision to that equation and suddenly the panic is gone and I can exhale into water enough to use a half-assed crawl stroke, and even enough to get soundly beaten at two games of "dive down and pick up the marbles from the bottom of the pool" (I know the game technically doesn't require exhaling under water but I have a ridiculously cork-like buoyancy and I'm not getting anywhere close to under water with my lungs full of air).

Well.  After my first "real swimming" excursion across the shallow end of the pool (all 20 feet of it), I was as giddy as a toddler who has just let go of the coffee table and taken a couple of wobbly steps for the first time.  And then I kept trying to swim farther and farther (turns out 2.5 lengths of the 40-foot pool was my limit), and babbling excitedly to Mary and her daughter about how happy I was that I had finally overcome my inability to breathe out into water.  I think it was the most fun I've ever had in the water.

There's nothing like the high you get from doing what you thought was impossible (no matter how silly the task might seem).  I don't drink, let alone use any of the more mind-altering and illegal substances available, so I don't have a lot to compare it to...but it's better than an extra cup of coffee in the morning; better than a can of Monster before a skating race (not that I would do that of course because that stuff is bad for you), better than the first day of summer vacation.  And regularly experiencing these highs changes a person.

A while ago,  Coach Jason mentioned that, rather than projecting the distinct lack of confidence in myself that I had shown when I first came to SISU, I now sometimes had "a bit of a swagger."  I tried to resist the smartass urge to reply with a quote from my favorite CrossFit t-shirt "It's not swagger; I'm just really sore."  Because I knew what he meant.  I could feel it, and apparently others could see it as well (and hopefully it's not an obnoxious amount; after all, I'm still a middle-aged Minnesota woman.)  When I visited my parents this past weekend my mom was asking about CrossFit and told me how happy she was to see me so excited about something again.  Parents love to see their kids (even their 50-year-old kids) happy, and let's be brutally honest--skating has not made me excited or happy for the past few years.  So my mom was glad to see me happily obsessed again...and, she said, she could even see it in the way I walked.  She didn't use the word "swagger," (I don't think that's in many 73-year-old's vocabularies), but I knew what she meant.  Happy.  Self-confident.  "Yeah, I can do this."  That's what she meant.

So yeah, there's a lot to love about CrossFit.  I love the intensity of the WODs and the support of fellow athletes and coaches and working so hard that you're leaving little drops of sweat behind you wherever you go.  I love that I can wear pants that I haven't fit into for years and that I can, for the first time ever, see some faint outlines of abs and arm muscles and that I feel, at 50, like I'm the fittest and healthiest I've ever been.

But more than all that, I love the high of doing something I thought was impossible.  The surprise and ultimate satisfaction of changing that long-standing view of myself, whether it involves a rope or a stupid pair of swimming goggles or maybe even something more important like taking a risk and trying something new and hard (or something old and "impossible").  I love believing that I can do things that I never thought I'd be able to do, and I even love that maybe I have confidence in myself that is expressed, in a nice Minnesota middle-aged woman way, as a tiny bit of "swagger."

And that is why I CrossFit.