Does This Qualify as a Demon?

Usually, I write to entertain. In fact, I spelled this out pretty thoroughly in my third blog post ever, back in June of 2011.  For those who don't want to follow the link back into history, the short version is this:  I was an American Studies and Creative Writing major in college, but apparently not a very good one--my creative writing prof once told me that, while I had great command of the English language, I had absolutely nothing to say.  It wasn't enough just to entertain, he said; no, I needed to "wrestle with some demons" in my writing.

Well, being a nice middle-class student at a nice middle-class college, I had no demons.  And, I'm happy to say, I really have had very few demons in the thirty-plus years since then.  So, lacking anything to "wrestle with," I've been writing to entertain ever since.  (I suspect that often I myself may be the only one I'm entertaining, but what the heck...I admit to being self-absorbed enough that I thoroughly enjoy my own writing.)

But now...I may have just the tiniest demon to write about.

Physically, my recovery from my hamstring avulsion and surgery is going fantastically.  Thanks in part to having a doctor who approaches rehab a bit more aggressively than most, at almost five weeks post-surgery I'm doing way more than I expected to be doing.  Most people with this surgery have a knee brace or, more rarely, a hip brace for the first six weeks or so post-op, to prevent them from making any movements that would stretch the hamstring and thus potentially cause re-injury.  My doctor did not use a brace with me, and had me begin weight bearing much earlier than many doctors do; he feels that as long as you're in controlled situations, this doesn't pose a risk of re-injury and prevents a lot of other issues that arise when you're basically immobile for six weeks.  So today, at the point when many people are still hobbling around in a brace and using crutches with no weight bearing allowed, I'm able to walk a mile or so, go up and down stairs with a normal gait pattern, and to drive short distances (What?  Yes, I know, recovery is not a contest.  But if it was, I'd be kickin' butt.)  I'm still off work for one more week, because the hamstring attachment site is still quite vulnerable for six weeks after surgery, and my job is unpredictable enough that my doctor doesn't want me in a situation that might result in re-injury until that six week mark has passed.  But all in all, physically, my recovery is going great.

Mentally and emotionally, not so much.

It turns out that my previous post about the light at the end of the tunnel might have been a bit premature.  My post before that, about sucking at being a patient, is actually much more accurate.  While I'm delighted that I can now move around without crutches or a scooter, walk the dog, drive short distances, and put my pants on without dangling them from a coathanger hook because I can't bend my knee far enough to reach my foot, ...much as I'm delighted to be able to do all that and more, I'm still having a really hard time with this.

I like to think I'm a pretty introspective person by nature.  Between that and my training as a Behavior Analyst having given me a lens through which to view human behavior, I do know what's going on (doesn't make me like it or deal with it any better, but at least I understand it).  Basically, my whole focus all summer was working out.  Mostly training for the Granite Games, of course, but also keeping up my speedskating training (which, of course, turned out to be a very bad idea).  Between CrossFit workouts, extra work at CrossFit, skating, stretching, foam rolling, and driving to and from workouts, I was spending probably 20-25 hours a week on working out--and loving every minute of it.  I loved the workouts themselves, the progress I was making, the weight I had lost and the new muscles I had found (I think I might have even glimpsed an ab at one point).  I was truly having the most fun summer I had had in as long as I could remember...and it all came to a complete and sudden stop at 4:45 on August 25.  In the split second it took to crash and tear my hamstring, I went from 90 mph to zero, and none of the stuff that I was enjoying so much was available to me any more.

No wonder I'm depressed and cranky.

Yesterday was a particularly frustrating day.  I went to the second of three Olympic lifting seminars put on by CrossFit SISU, and like the first seminar last week, this one contained a wealth of information and I was glad I went...but while last time I found it fun to be back in the box--even if only as a spectator--this time I just found it depressing.  Despite having progressed to being able to walk without crutches now, I realized that I'm only able to do about 1% of the stuff that we do in CrossFit--no lifts that involve the lower body, of course, but also no simple stretches, no warmup jog, no anything that requires anything more of the lower body than simply standing in one place.  And being back in the box also made me more aware of the fact that it's not just the working out that I miss; it's the routine of working out.

I am fully aware that I'm a very routine-oriented person (some have even used the term "rigid," but I choose not to listen to them).  I have my coffee out of the same mug every morning and I have my (Paleo) granola in the same bowl every morning and I have my routines for walking the dog and driving to work and watching TV...and, of course, for working out.  I love the routines of packing up for CrossFit or skating and getting the right songs on the iPod playlist and driving to the workout...in fact, I love the routines almost as much as I love the workouts themselves.  And unfortunately, this love of the routine as well as the workout makes it much more difficult for me to get my "fix" while recovering from this injury.

I know people--namely my sister and my friend Mel--who are, like me, somewhat obsessed with working out.  But for them it seems to be mostly the workout itself that's reinforcing (ooh, Behaviorist-speak.  Sorry; it creeps in from time to time).  For example, when we go to the cabin my sister has to work out while we're there, even if that means just a bike ride down the highway. Me? Not so much.  I'll happily go on a fun mountain bike ride on a cool trail when we're at the cabin, but a boring ride down the highway just to get exercise does nothing for me.  Mel, who suffered her own horrible inline crash a couple years ago, had some great suggestions for me about upperbody stuff I could do to get my "workout fix" while I'm recovering and while she was certainly right that it would be a workout, I knew it wouldn't be fun, it wouldn't be reinforcing, and it wouldn't help with the mood issues I'm experiencing--because for me the workout is only half of the equation, and without the other half, the workout routine, it just wouldn't work.

So, after a cranky day that ended up in a cranky evening during which I attempted to find some reinforcement in lots of non-Paleo eating (there's a blog post in and of itself), I did some Googling. Turns out there are many articles about post-injury depression in athletes; this one is CrossFit-focused and particularly good; I also found several triathlete-focused articles that addressed the issue of having all of one's workout routines disrupted by injury (triathletes, due to the volume of training they put in, tend to have their workouts form a large part of their daily routines; so they, like me, not only miss the workout itself, they also miss a large chunk of their usual daily schedule.)  One article even mentioned the changes in eating habits that can come with trying to recover from an injury (I'm currently the poster child for that).  It all made sense, it all sounded very familiar, and it was nice to know that I'm not alone and that what I'm experiencing is normal.  Sucky, but normal.

So the point of this long and somewhat whiny post, other than that I now find myself with just the tiniest of demons to wrestle with, is...well, I don't actually know what the point is.  Maybe the point is that I go back to work a week from today, and hope to start some modified upperbody-only CrossFit next week as well...and I'm hoping, and assuming, that after I start those two things,  life will start returning to normal and my tiny tiny demon will vanish.

Because it turns out I was right; I'd much rather write to entertain than to wrestle with demons, however small they might be. 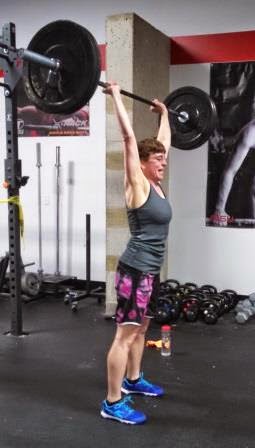 I miss this version of me.