Last weekend was full of surprises, not the least of which was my inability to figure out a simple Android tablet so that I could blog about all of the surprises that last weekend was full of while the surprises were still actually happening, rather than on Monday evening when it's all just becoming a dim memory.  So, now that I'm home and somewhat rested and have a nice,  easy-to-use desktop computer at my disposal, here are, more or less in order, the "Surprises from the Masters Single Distance Meet 2013:"

Surprise #1:  Leaving work at 3:30 and driving almost 6 hours to Milwaukee is often a recipe for disaster.  In the past I've tried massive amounts of caffeine to keep me awake, but this time I found something better--FRS energy shots.  I had one that I had gotten in the goody bag (from Kim and Eric Kraan of SkateNow) at skate camp, but given my obsessive insistance on rigidly adhering to my rituals understandable caution about trying new things before workouts or races, I hadn't tried it yet.  About an hour into the trip suddenly seemed like the perfect time to break open that bad boy, so I did--and let me tell you, I was one happy camper for the rest of the drive.  By the time I hit Milwaukee four hours later I had decided that every song on my iPod was my favorite and was worthy of being sung along to at top volume--and that I really needed to find some more of those FRS energy shots.

Surprise #2:  My NeverGonnaHappen WayTooSmall skinsuit--my suit from making MAT 1 in 2010-2011--actually fit.  Not because I lost any weight, but because those babies can s-t-r-e-t-c-h.

Surprise #3: The second 500 meter race.  The surprise of the first 500 meter race was that I actually got a somewhat decent time.  See, here I am leaving the line (thanks to Steve Penland for all the photos): 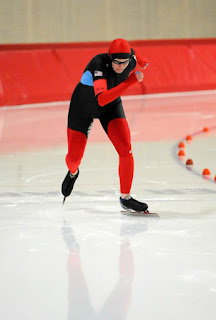 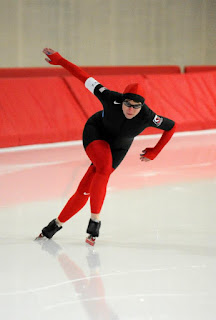 Surprise #4:  The 1500.  I had done three 1500's up to this point in the season, and they had ranged from "dreadful" to "sluggish."  So I wasn't expecting much, and I was put into a quad (four skaters race at once; one pair goes first and the rest follows after 15-20 seconds) that reflected my early-season times.  I found an unexpected--and very welcome--bit of speed in the 1500, though, which resulted in me getting my second-fastest Milwaukee 1500 time ever--and catching the person in front of me just before the finish line.  See? 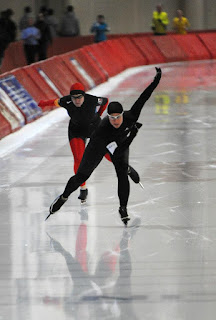 Surprise #6  The 5K.  The good surprises run out...just in time for my big race.  I kind of suspected it might not go as well as the others when I found myself thinking, for the hour before the race, "twelve and a half laps is one heck of a long way" (or thoughts to that effect).  That is not how one should think before a race.  I think I was, for the first time since my first 5K, kind of afraid of doing a distance race. So, in hopes of avoiding major pain, PVC's, and general mayhem, I started slow and skated around at a rather, um, relaxed pace...until I heard my time for lap three (Mel's dad was kind enough to yell my lap times to me).  It was a 42.5, and I suddenly realized "hey, I don't need to be going quite that slow."  So I sped up.  I held 41's through lap 8, then the last 4 were 42's for a final time of 8:48--my worst since my first-ever 5K, by almost 10 seconds.  Still, I made the MAT 1 qualifying time, and I didn't get any PVC's, so I count it as a victory.

Surprise #7:  I decided to participate in the 12-lap "for fun" mass start race that was held about 20 minutes after I finished my 5K.  I figured that I need to start skating more laps if I want to get in shape to do a faster 5K later this season, and there's no time like the present. The little group I ended up skating with got lapped, but we maintained our dignity by skating the final lap anyway, even though we were supposed to be done when the leaders crossed the line.

And there you have it...the surprising Masters Single Distance 2013. I'll leave you with a final photo from the 1500, just to prove that I can sometimes skate without the chicken wing: 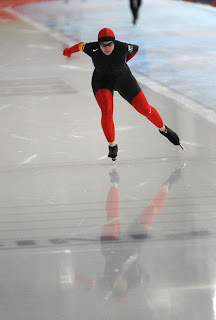