I Have a Screw Loose

Note: Fellow middle-aged-lady-speedskater and skate blogger Sharon was kind enough to include me in  a series of posts she's doing that feature interviews with a "committed, full-time speedskater" (Kevin Jagger)  , a "totally obsessed but has a day job" skater (me), and a "just starting but soon to be just as nuts as the rest of us" skater (Sharon herself). Check it out, and the rest of Sharon's posts as well...she's very funny and insightful!  And the first post in the interview series, I think, demonstrates nicely something that I might have been told a time or two...I truly don't know when to stop talking.

Tonight was night two of the 2011-12 season, and I was looking forward to seeing if my interval times would be any faster this year.  Ever since I started skating my interval times have pretty much been 40 seconds per lap.  Inline or ice, Milwaukee or Roseville--it didn't matter.  I couldn't break that damn 40 average.  And sometimes, in hypo-ville, I couldn't even come close to it.  So I thought that tonight, with my "new and improved" technique, might be interesting.

Before I set out onto the ice, I performed a little skate maintenance.  As I've mentioned here, I tend to be a bit perfunctory in the tighten-that-bolt department, so I figured that, even though I'd just tightened the bolts when I was in Salt Lake, it might be prudent to do it again.  So I tightened all the bolts on my skates.

All the bolts that I knew about, anyway.

And then I went out and skated.  And the first 400's were great--38's and 39's.  Hmm, things are looking up. After my "set rest," I launched into the 600's.  The first one was good--the full lap was a 38--but something about my left skate felt and sounded funny.  "Oh, well," I thought, "I must be pushing funny with my left skate. There can't be anything wrong with it; I just tightened everything."  So I continued on, doing two more of the prescribed four 600's.  They were slower, at 40 and 41 seconds, and my skate was sounding and feeling increasingly funky.  "Maybe I broke a spring," I thought, "after all, nothing else can be wrong; I just tightened everything."  So I looked, but both springs were intact.  But when I grabbed the blade and wiggled it, there was a definite wobble.

"Damn, " I said to anyone who would listen as I clomped unevenly back across the walkway to the warming house, right skate "clapping" robustly with each step, left skate slopping and thumping, "I just tightened these bolts--I don't know how they came loose in less than 15 laps."

Inside the warming house, a fellow master's skater grabbed my left skate and examined it.

What bolts?  Where?  Oh, you mean these two bolts, that hold the front of the blade to the frame?  These two bolts that I've never, in 10 years of skating on clap skates, noticed nor tightened?

Unfortunately, even though one friend found the errant bolt on the ice, and two others provided me with the correct tools (I carry tools in my skate bag, but the bolts-I've-never-noticed require a wrench-I-don't-have), I couldn't re-assemble the skate-- skating on a loose bolt had messed up the threads in the blade.  Fortunately, though, Mechanically Inclined Hubster has drilled into me the concept of "if it doesn't turn, for God's sake don't force it," so I didn't make things worse by following my usual "I'll make it fit" approach.

Clearly, there was nothing to do but head home.  So I took a picture of the oval... 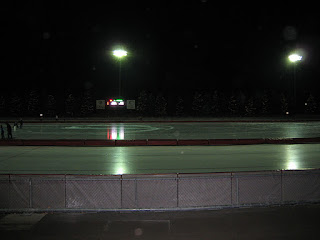 ...and drove home to present my tale of woe to the Hubster, whose task it would be to fix what I had broken.

Here are my skates, one all forlorn with its unattached bits... 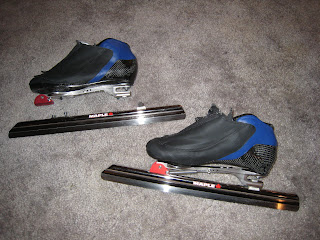 One of these things is not like the other...
The Hubster, while expressing willingness and ability to fix the skate, couldn't help but marvel a bit.  "There are only so many parts to skates," he said, "and I think you've now messed up all of them."
What can I say...I'm an overachiever.
With a screw loose.
Posted by Kaari at 7:55 PM