American Cup, Day 2--You Make My Heart Beat Faster (or at least have PVC's)

I always like to get to races early, because I find that it's in my best interest to get out on the warmup ice as soon as the Zamboni clears the track.  It worked out great yesterday; we had a full hour of warmup ice, and it turned out that the first half hour was populated by me and four other early-riser masters skaters, while the second half hour was occupied by the other 65 skaters.

Today, though, we only had half an hour of warmup time, so even though I was the first one on the ice I was quickly joined by more skaters than I'd like.  Since my first race, the 1000 meter, wasn't for two hours after warmup was done, I figured it wouldn't matter the crowded ice made me a bit perfunctory in my warmup.

The day started with the Star Spangled Banner (although the Zamboni driver didn't stand at attention): 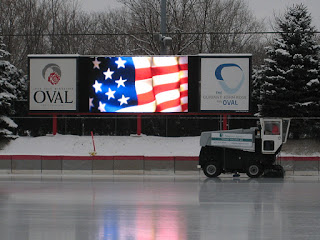 We did Oh Canada for the Canadian skaters, too. 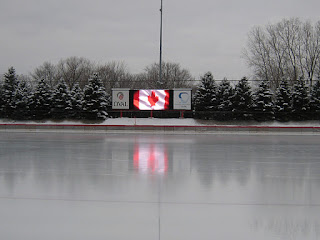 Then I had two hours to hang around, watch races, talk to fellow skaters, do physical therapy exercises to keep my back happy, and obsess over the timing of my thyroid meds.  My 3000 meter race, which is simultaneously the one I'm most concerned about doing well in and the one that is most affected by thyroid med timing, was one of the last on the schedule and thus one of the hardest to accurately predict the time of.  I finally settled on a time to take the meds, but I still wasn't sure it would be optimal.  I was afraid that, if the race was later than I guessed it would be, I'd be low on meds by the time I skated.
Finally, at 11:00, it was time for my 1000 meter.  I view the 1000 as only a slight step up from the  500.  It's still short enough to both make me lose rational thought process and thus revert to a frantic scramble, and to require more fast-twitch muscles than I've ever possessed.  Still, the 1000 went well...well, except for the poor start, the slip in the first corner, and the PVC's (a harmless but performance-interfering heart arrhythmia) at 800 meters.  Despite all that my time, 1:40.13, was my fourth fastest outdoor 1k, and 4 seconds faster than I skated the distance in this meet a year ago.
Cool.
Another two hours of wandering around, PT exercises, catching Coach TieGuy--who was kept busy being one of the starters at the event--for a moment or two to discuss my skating, and visualizing my 3k.  Then it was time to skate.
I had asked one of the coaches from the local club if he could give me my lap times in the 3k, since Coach TieGuy was busy waving a gun around, and he was kind enough to oblige.  So I knew that my opener (the first 200 meters) was slower than usual, at 24.6 seconds.  I knew that my first lap was a 39.2, pretty much right where I wanted it to be.
And I knew that my second lap was a 42.5.
Yes, a 3.3 second die in the second lap.
Now, to put that in perspective, when I skated a 5k--12.5 laps--in Milwaukee in late October, it took me 7 laps to slow 3.3 seconds.  So doing it in one lap was kind of a shocker.
And then I slowed another 1.1 seconds in the next lap, to a 43.6.
At this point, I was figuring that this would be a "hypo skate," in which I slow by a second or more every lap, until I finally crawl across the finish line.  Damn, I thought, I knew I mistimed my thyroid meds... (when I told the Hubster about my race, and mentioned this concern, he said "Really?  You thought about that while you were racing?  What else did you think about?  What you need to put on the grocery list?  World Peace?"  What can I say...my mind wanders sometimes).
Anyway, lap four was no better, at 43.9.  But lap four had something else...more PVC's. At least those would explain the slow pace.  And their absence, in lap five, would explain why lap five was over a second faster at 42.8, lap six was a nice consistent 42.9, and the final lap, lap seven, was a 43.0.  My total time was 5:22.39--my second fastest outdoor 3k ever.
So, I don't know.  Usually I feel PVC's--they feel like a "thump," or a couple of faster beats followed by a slower one--but I know that it's quite possible to have them and not feel them.  Maybe that's what happened in laps two and three, but I guess I'll never know. All I know is that, at the end of the day, I had a couple of very good race times--and a nice earworm of Matt Nathanson's "You Make My Heart Beat Faster."
Oh, and a T-shirt. 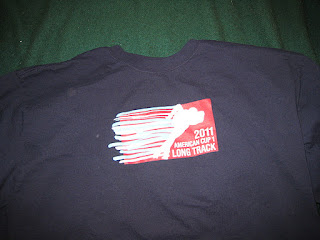 Nothing beats a good race T-shirt...except a good race.  When you have them both, well, you've got yourself a darn good weekend.
Posted by Kaari at 7:31 PM