I have a love-hate relationship with the 500 meter.  I love to hate it.  Coach TieGuy (who is a firm believer in the power of the mental side of athletics) used to have me incorporate recitations of "I love the 500" into my mental race preparation, but it didn't do much good.  I stink at the 500, it always makes me feel like a total klutz, and so I hate it.

Today, I hated it a little less.

This weekend is the American Cup I Long Track Speedskating race, the first in the four-race American Cup series.  The other three races are held in Milwaukee, Salt Lake, and, strangely enough, Calgary (this one doubles as the North American Championships, which explains its Canadian locale).  American Cup races are "regular" races, as opposed to Masters-specific events, and are only divided into Junior (under 19) and Senior (19 to death) divisions.  Since I'm possibly closer to death than to 19, I never care much about how I stack up against other (younger) racers in these events; I just want to get good times for me.  Preferably Personal Bests (PB's), although that hasn't happened at an outdoor meet in a long time.

Today I was optimistic, though.  The conditions were good--30 degrees and only a light to moderate wind.  It's always funny to see the "indoor babies" who skate in Milwaukee come up to the Frozen Tundra of Minnesota to race.  You can always tell them from the "natives" during warmup; they're the ones sporting full-on neoprene face masks, neck warmers, and goggles. 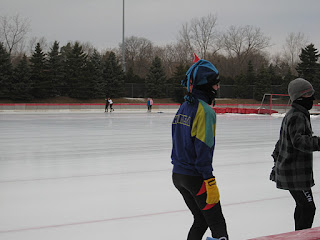 Um, guys...it's 32 degrees out... (no, he didn't wear the hat during the races!)
Anyways, super cold ice is slow, as is ice with standing water on it or snow on it, or ice at any temperature during 40-mile-per-hour winds, or...you get the idea.  There are a lot of ways that a Minnesota winter can sabotage your race efforts...but today looked good.
Then, too, there was the optimism of my New Improved Technique (NIT).  I had hopes for NIT helping me get some decent times in the longer races, particularly tomorrow's 3k.  The 500, though, I figured was probably a lost cause.  Over the last couple years I've gone from typically doing 50-second 500's outdoors to typically doing 52's.  I figure my aging legs are losing their fast-twitch muscles.
All three or four of them.
So when I visualized my races this past week during my mental race prep, I didn't bother to worry about trying to figure out what time I was hoping for in the 500.  I just wanted to get it over with, practice my NIT during the race, and move on to the fun stuff.
So last night I finished all my race prep--visualized, sharpened skates, packed skinsuit and recovery drink and camera.  At 11:00, as I was getting ready for bed, the Hubster appeared at the bedroom door in his Carhartts.  11:00, it seems, is a good time to throw the snow tires on the wife's car.
Actually I was fine with that, since the Hubster is a bit of a night owl and often does his auto maintenance after midnight.  I was a little alarmed, though, when his Carhartt-clad self reappeared in the bedroom at 3:00 am to inquire as to my departure time in the morning.  Turns out one of the snow tires had a nail in it and couldn't be mounted until it was fixed.  So the Hubster--who hadn't planned on attending this weekend's races--hauled himself out of bed at the get-the-worm hour of 7 am, in order to drive me to the races so that he could then take the tire to be fixed and then come back and watch me skate.
It all went fine until after he dropped me off.  As I was wandering aimlessly about the almost-deserted warming house (I like to get places early), I suddenly realized that I had left my thyroid medication in the car--and I needed to take it!  So I sprinted back up the stairs, flew out the door, and fortunately saw the Hubster's Avalanche just starting to pull away from the curb.  My pre-race warmup suddenly expanded to include a desperate, arm-waving sprint in pursuit of the Hubster, who was looking determinedly in the other direction as he drove off.  Fortunately I managed to flag him down before he exceeded my top speed, but the frantic sprint pissed off my already-unhappy low back...and a happy low back is critical to an enjoyable--and fast--speedskating experience.  So my optimism wavered a bit there.
Still, warmup went well, and the application of a couple of physical therapy exercises seemed to calm my back down to normal semi-unhappy levels.  By the time the men started skating their 500's, I was feeling pretty good again.
Men's 500 meter...the scoreboard lists the skaters as "Blumel, M" and "Blumel, M"--two brothers were paired together.  I think M Blumel won. 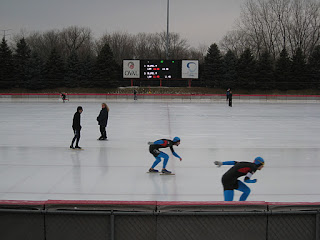 And then it was my turn.  I had a lot of technical things I wanted to get right in the 500, but still didn't really have a time I was shooting for.  Oh, I did tell the Hubster that I'd be happy with a 50...considering that I got a 52 at this race last year, that seemed a bit far-fetched, but a girl can dream, right?
My list of technical things to focus on during the 500--as written in my trusty notepad before the race--went something like this: right foot a bit further back on start.  Keep hips forward during first 50 meters.  Power strokes, don't scramble.  Left hip in on corner.  Stay low in corner.  Drive knees and focus on full recovery stroke on backstretch.  Big left recovery stroke before entering corner.  Final straight--keep the power, don't scramble.
My actual thought process during the 500 was a bit less helpful, and went something like this: "Go to the start"  Alright, right foot a little bit farther back..."Ready"  Hmm that doesn't feel quite right, oh well too late.  "BANG"  Aaaaaaaaaaaaaa....skate skate skate damn forgot to breathe skate skate corner! corner!  my pair is passing me who's going to switch lanes first she's slowing I'll go past her good into the other lane skate skate skate AAAAAAAAA last inner!  Last inner!  Sharp corner!  Hip in!  Whew, made it.  Skate skate skate skate skate finish line.
Look at scoreboard.
49.67
Cool.  A PB.
(Actually, I couldn't confirm that it was a PB until I got home and looked in my data notebook...I didn't bother to look up my outdoor 500 PB before the race because I figured it was irrelevant.)
So yeah...take that, 500.  I finally lowered my outdoor PB, for the first time since 2008.  So maybe I don't hate the 500, after all.
(Oh, yeah...my second race, the 1500, also went well.  No PB--my old PB was set on a day that had absolutely perfect conditions for outdoor racing, so that one might stand for a while.  But my time was 5 seconds faster than what I typically did in outdoor 1500's for the past two years.  So I'm happy. And now I have to go sharpen my skates, because tomorrow I have the 1000 and the 3k.)
Here's the only picture the Hubster got of me today, taken during my cooldown (I forgot the video camera so he tried to take video with our little still camera, with less than stunning results). 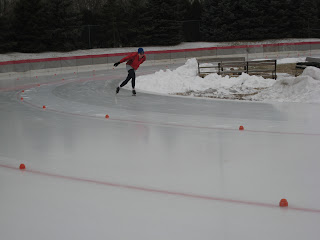